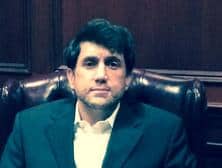 A graduate of the University of Michigan and The Wayne State University School of Law. He has been in private practice, representing the injured, since 1993. Member of the State Bar of Michigan, National Trial Lawyers, Michigan Association of Justice, and Macomb County Bar Association. He is a life member of the Million Dollar Advocates Forum and has been selected as one of the Top 100 Trial Lawyers in the country by the National Trial Lawyers Association.   He was recently featured in a lengthy network television news story about one of his high profile, police cases. He has also been featured in Newsweek magazine as well as countless other local media outlets relative to additional high profile cases that he has handled. He was recently named into the National Trial Lawyers' Top 25 in motor vehicle accidents.  He just obtained a $6,000,000 judgment out of the Macomb County Circuit Court on behalf of a family whose son was killed in a tragic automobile accident. Although their son was originally faulted for the accident by the authorities, tireless investigation and relentless legal efforts proved that ascertain to be incorrect, leading to the judgment.