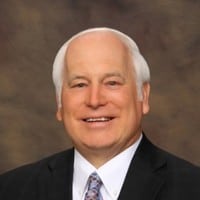 William H. (Bill) Broome was born on October 31, 1951. Bill is a 1973 graduate of Auburn University and a 1977 graduate of the University of Alabama School of Law. Bill was a sole practitioner in Anniston, Alabama, from 1977 until 2015 when his son, William H. Broome, Jr., joined his practice as a partner. Their practice is devoted exclusively to the defense of individuals accused of criminal offenses ranging from capital murder to misdemeanors in federal, state, and municipal courts.

In 2018, Bill also received the Commissioners’ Award from the Alabama State Bar Association. This award is given to recognize individuals who have had a long-standing commitment to the improvement of the administration of justice in Alabama.

Bill is currently serving his sixth term, a total of eighteen years, as the Alabama State Bar Commissioner for the Seventh Judicial Circuit. He served on the Bar’s Executive Council in 2006-2007 and is currently the chairman of the Bar’s Appointed Counsel and Indigent Representation Committee. Bill is a Past President of the Alabama Criminal Defense Lawyer Association (ACDLA) and currently serves on its Board of Directors. He has received numerous merit awards from ACDLA for outstanding contributions to the criminal justice system.

During his legal career, Bill has tried eighteen (18) capital murder cases to a jury verdict and has never had a client receive the death penalty.