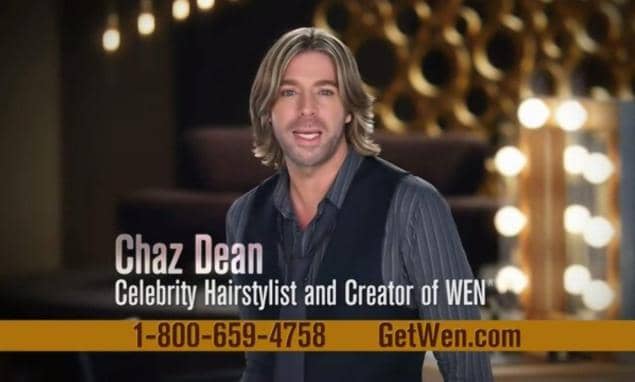 Mediation between the parties began just before Christmas 2015, with both sides sitting down in an effort to resolve the claims.

Severe and permanent damage to hair

Chaz Dean gained notoriety due to his high-profile clientele (including model Brooke Shields, singer Alyssa Milano and model Nicollette Sheridan), and built a massive empire around the hair care line he developed: WEN. The women 200 who filed against infomercial giant Guthy-Renker and the brand claim, "Wen products can cause severe and possibly permanent damage to hair, including significant hair loss to the point of visible bald spots, hair breakage, scalp irritation, and rash."

Left with anything but red carpet-ready hair, the plaintiffs also claim the brand failed to warn consumers of the risks and dangers associated with the products quickly enough once consumers began complaining of the hazards. The plaintiffs further alleged that the brand was more concerned with protecting itself, removing negative reviews on social media instead of addressing them.

The lawsuit is charging WEN (which is based in California) with violating the California false advertising law, violating the Florida Unfair and Deceptive trade Practices Act, negligence and failure to warn among other things. The lawsuit also claims that Guthy-Renker had “knowledge of a material design defect [and did not] disclose and/or warn plaintiff and other consumers that Wen Cleansing Conditioner can and does cause substantial hair loss [and that] Guthy-Renker concealed customers’ comments concerning hair loss, by blocking and/or erasing such comments from the WEN Facebook page.”

This is not the first year the hair care system has received serious complaints. Wen-related hair loss complaints on consumer websites date back at least five years. The lawsuit provides online reviews, however, showing that user complaints dated back to 2012. One claimed her hair “was healthy, now it’s like straw and brittle.” Another said, “Almost immediately after using the product I noticed huge amounts of hair caught in the drain.” Yet another said, “I can’t leave my house. I’m depressed. WEN hair products is [sic] responsible for my hair loss.”

More recently, complaints have been taken to Facebook and Twitter, and they also pop up in product reviews on sites like Sephora.com and Amazon. Smaller suits with similar claims have also been filed against WEN dating back to 2014.

Despite the allegations, some consumers continue to rave about the WEN product line, which is said to be natural and formulated to improve both the health and appearance of hair. Dean’s high-profile celebrity endorsers have not commented on the subject. Dermatologists agree that the causes of hair loss are hard to pin down specifically and will be difficult to prove in court.

WEN continues to stand by their products and has issued the following statement:

“With well over 10 million WEN products shipped since 2008, our customers’ overwhelmingly positive response to WEN is a testament to the benefits it can deliver for its users. These benefits are reflected in consistently high rankings from independent consumer product sites as well. There is no scientific evidence to support any claim that out hair care products caused anyone to lose their hair. There are many reasons why individuals may lose their hair, all unrelated to WEN. We intend to vigorously contest the allegations made.”

Amy Friedman, a nurse practitioner who lives in Florida and the lead plaintiff in the WEN class action, bought the Sweet Almond Mint WEN Cleansing Conditioner basic kit in January 2015. We have probably all seen the same infomercial Friedman happened upon while late-night channel surfing. Friedman and her team allege that “within two weeks of beginning use of her WEN Cleansing Conditioner, [she] began losing substantial and abnormal amounts of hair [and] the hair loss continued for approximately three more weeks [and she] lost one quarter to one third of the hair on her head.”

The class action suit also points out that the WEN website clearly states “that these results are not typical,” referencing the cleansing conditioner. Friedman and her fellow plaintiffs, then, are asking a relevant question in their filing: “If the results are not typical, what purpose does this information serve, other than to mislead potential consumers into purchasing defendant’s defective product?”