60% of Companies are Facing a Class Action - New Survey Report 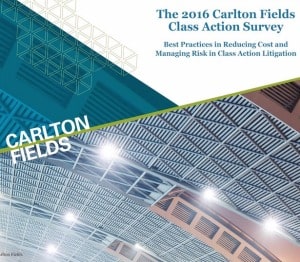 According to new research by defense law firm Carlton Fields, corporate spending to defend class actions is up after four years of decline. This marks an important turning point, and defense litigation spending is projected to increase in 2016 as well.

Highlights include the following findings:

The survey draws on 391 in-depth interviews of general and senior legal officers at major corporations in more than 25 industries. The data collected presents a snapshot of the ways in which leading corporate legal departments identify, measure, and manage class action risk.

Consumer fraud and labor and employment remain the most prevalent class action matters. They account for 48.7 percent of all class actions, down slightly from 2014. This year, financial services industry business practices emerged as an expected source of increased class action activity. In this connection, the proposed Consumer Financial Protection Bureau rule that will limit arbitration is expected to give rise to new class action suits. On the other hand, while data privacy class actions have been highly anticipated for several years, they remain a small percentage of matters overall.

The percentage of class actions identified by companies as routine is falling, as higher-risk matters become the norm. Complex matters now account for 62.5 percent of all class actions, up from 46.8 percent last year.

Even while increasingly facing higher-risk matters, corporate legal departments have reduced the number of in-house attorneys used to manage them. Not surprisingly, these in-house attorneys are spending more time on class actions, and their companies are relying more on outside counsel.

When evaluating the risks class actions present, exposure is still deemed the most important variable, and corporate counsel increasingly report that “coming in under estimated exposure” is a key determinant of success.

Less "Defend at All Costs"

Faced with a greater number of class actions—and higher-risk matters—companies are taking a pragmatic approach. While the percentage of corporate counsel who favor a “defend at all costs” approach dropped from 13.6 to 9.7, the percentage committed to defending “at the right cost” rose from 28.8 to 33.9. In addition, 68.7 percent of companies settle their class action lawsuits, most at the precertification stage.

While the use of alternative fee arrangements to manage class actions declined somewhat, nearly half of companies still rely on them. Those who use them increasingly favor fixed fees and capped fees. Capped fees, in particular, are gaining in popularity.