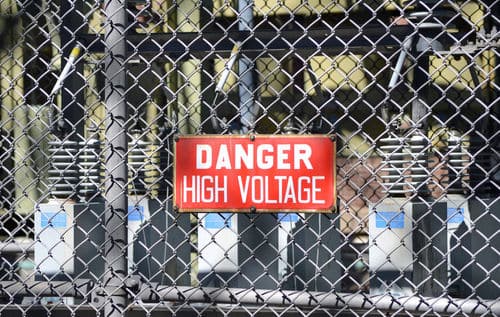 Citizens Energy Services assigned a lineman to do maintenance on a section of a power line, even though he had not been properly trained work on the switch. The switch had 27,000 volts and 137 amps running through it.

A utility lineman who lost both of his legs in an electric explosion won a $22 million jury award from a Vermont utility that assigned him to work on an ungrounded, defectively-installed power switch.

Michael Hemond was hit by a 5,000-degree hot electric arc that entered through his left elbow and exited through his legs, blowing off several toes. The blast knocked him out and hospitalized him for 50 days where both legs were amputated below the knees in two operations.

According to one of his attorneys, Tim Kenlan of Berman & Simmons in Lewiston, ME, the utility -- Citizens Energy Services in Maine -- was busy in a sale of its assets in 2004.  It cut costs by installing the switch with too little spacing between the power lines, running more power through it than it could handle and completely failing to ground the switch. When 36-year-old Hemond opened the switch in the 2006 incident, he essentially grounded the switch with his body.

“Citizens was trying to cut corners and save as much money as possible in advance of the sale,” Kenlan said. “Engineers were given the task of going through easement documents rather than planning the installation of the switch. Things fell through the cracks and the switch was never grounded or finished.”

The utility partially installed an unusual vertical switch to save space, even though all other switches in the system were horizontal. “Citizens was getting out of the business and doing an asset dump, and didn’t want to buy new equipment,” Kenlan said.

Citizens assigned Hemond to do maintenance on a section of a power line, even though he had not been properly trained work on the switch. The switch had 27,000 volts and 137 amps running through it. “1/1000th of an amp is all that is required to stop the human heart,” Kenlan said.

The company could have prevented the catastrophic injury in three ways:

Hemond, now 42, is a married father of four children. He has recovered using prosthesis and actually returned to his job as a lineman. His wife Tracy was also awarded $2 million for loss of consortium.