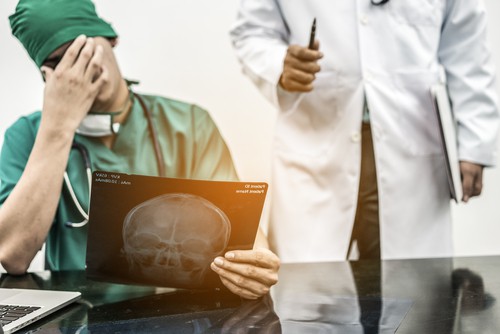 A New York jury awarded more than $26 million in a medical malpractice case to a 7-year-old girl who was born deaf and with vocal cord paralysis because a hospital resident failed to prescribe hormones that could have suppressed premature labor.

After a monthlong trial, the jury returned a verdict, awarding more than $26 million to Danielle Madden-Buck and her daughter Aleigha Buck for the child’s past and future pain and suffering. The jury also awarded $500,000 for the wrongful death of her twin sister, who died 28 days after birth.

In 2010 Aleigha was born deaf, along with other health problems. Symptoms of pre-term labor started when her mother was 21 weeks pregnant. Pre-term birth is the biggest cause of injury and death related to childbirth – more than all other risk factors combined.

Seen only by resident

On February 9, 2010, the plaintiff’s mother twice visited the Labor and Delivery Triage Unit at Maimonides Hospital in Brooklyn, NY, due to painful cramping and a brownish discharge that was turning pink, which suggested bleeding. During both visits, she was seen only by a resident – not an attending doctor – and was discharged. The doctors missed the opportunity to prolong the pregnancy by ordering bed rest or prescribing hormones like tocolytics, which can suppress premature labor.

The mother delivered later in February when the twins were still very premature. The child's twin sister, unfortunately, died one month after her birth. The plaintiff survived, but suffered a host of problems; the most prominent issues were her deafness and vocal cord paralysis. To this day, hearing aids are minimally helpful and she can only communicate through sign language.

Brooklyn Supreme Court Justice Ellen Spodek presided over the case. The plaintiff was represented by Jim Wilkens, of counsel to the Sullivan Papain Block McGrath & Cannavo P.C medical malpractice group. He argued that the mother’s condition was a possible precursor to cervical shortening and that she should have been admitted to monitor her cervical length. If this had been done at the first sign of cervical change, bed rest and tocolytics would have been more useful, and could have mitigated the risks of the delivery. The defending obstetricians conceded that those steps would have been effective treatments before the mother’s cervix became too short.

The jury deliberated for eight hours and returned a verdict in favor of the plaintiff, awarding more than $26 million for the child’s past and future pain and suffering. The jury also awarded $500,000 for the wrongful death of her twin sister, who died 28 days after birth.