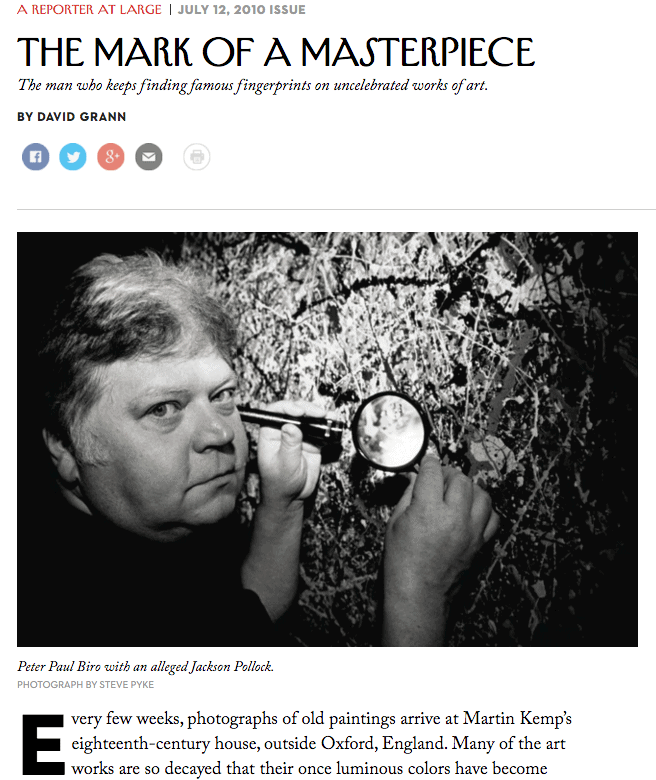 In Biro v. Condé Nast, et al., the Second Circuit recently determined that, in a defamation action, limited-purpose public figures must plead in a “plausible way” that the defendants acted with actual malice, citing Federal Rule of Civil Procedure 8 and the Supreme Court’s decisions in Iqbaland Twombly.

Plaintiff Paul Biro sued Condé Nast, among others, after its publication The New Yorker published an article (the “Article”) about Biro in 2010, which he claimed was defamatory.  According to the court, Biro is “a controversial figure known in the art world for using fingerprint analysis to authenticate art in an effort to insert a measure of objectivity into a previously subjective process.”  The article questioned the trustworthiness of Biro’s methods and his authentication of paintings, contained interviews of persons critical of Biro, and suggested that he stood to profit from the allegedly dubious authentications.

Biro alleged that Condé Nast, among others, “either knew or believed or had reason to believe that many of the statements of fact in the Article were false or inaccurate, and nonetheless published them” and that it “acted with actual malice, or in reckless disregard of the truth, or both.”

Although the district court found that Biro adequately alleged an “actionable defamatory false statement of fact, or false implication,” it dismissed Biro’s defamation claim because “Biro, as a limited-purpose public figure, failed to plead sufficient facts to give rise to a plausible inference of actual malice[,]” citing Iqbal’s “instructions that, where a particular state of mind is an element of a claim, Rule 8 requires that it be plausibly pleaded and supported by actual allegations.”

The Second Circuit Court of Appeal reviewed the dismissal de novo.  The Court’s opinion is available here. The Court of Appeal noted that, in order to survive a motion to dismiss or a motion for judgment on the pleadings, a complaint must contain enough facts to state a claim for relief that is plausible on its face, citing Bell Atl. Corp. v. Twombly, 550 U.S. 544, 570 (2007).

In turn, to be plausible, a claim must contain more than “naked assertions” or “conclusory statements” – rather, a claim is plausible when the plaintiff pleads factual content that allows the court to draw the reasonable inference that the defendant is liable for the misconduct alleged.

A limited-purpose public figure – and public figures generally – suing for defamation must show that the allegedly defamatory statements were made with actual malice, a.k.a. knowledge that the statements were false or with reckless disregard as to their falsity.   Biro argued that Federal Rule of Civil Procedure 9(b) allows malice to “be alleged generally[.]”

Rejecting that argument, and citing opinions from the First, Fourth, and Seventh Circuits, the Court determined that, Rule 9(b)’s language notwithstanding, malice must be alleged plausibly in accordance with Rule 8.  The Court held that a public-figure plaintiff must plead plausible grounds to infer actual malice by alleging enough facts to raise a reasonable expectation that discovery will reveal evidence of actual malice.

Simply put, this means that limited-purpose public figures – and public figures generally – have a high burden in defamation lawsuits, and federal courts have significant leeway to dismiss such claims.  Absent plausible factual allegations of actual malice, defamation claims brought by such public figures will be dismissed for failing to meet the heightened pleading requirements of Rule 8,Iqbal, and Twombly.  This is a good result for publishers.