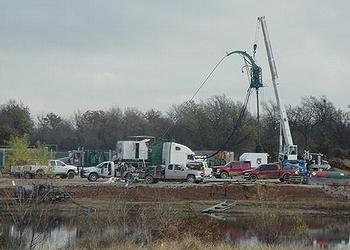 The April 23, 2014, verdict against Aruba Petroleum is seen as a landmark decision for opponents of fracking, or hydraulic fracturing, the process of drilling and injecting high-pressure fluid into the ground in order to fracture shale rock to release natural gas.  Up to 600 chemicals are used in fracking fluid, including several known carcinogens and other toxins.  According to studies, only 30-50% of the fracturing fluid is recovered in a fracking operation.  The rest of the toxic fluid is left to penetrate the ground and is not biodegradable.

Robert and Lisa Parr, along with their young daughter, began experiencing health problems in 2009, after Aruba began drilling the first of 20 wells which the company operates less than two miles from the Parr's ranch near Decatur, Texas, about 45 miles northwest of Fort Worth.

In less than three years, the family experienced chronic migraines, rashes, dizziness, nausea and chronic nosebleeds, including an incident when their daughter awoke in the middle of the night covered in blood.  Livestock and pets on the family's ranch were also affected with nosebleeds and other illnesses. A dwarf calf was born of a cow that had delivered healthy calves before the fracking operations started.

Houston attorney David Matthews, who represented the family, said the verdict validates the claims made by many others regarding the health hazards associated with fracking.

"Many studies have shown the adverse health effects on those who live or work near these sites, but those findings haven't really changed anything," said Mr. Matthews.  "This verdict is a game changer.  It should make fracking operators stand up and take notice."

Air quality tests conducted by The Texas Commission on Environmental Quality found hazardous air within a quarter mile of the Parr home that could lead to respiratory and neurological risks.

The Parrs were also represented at trial by attorneys Brad Gilde of Houston and Richard Capshaw of Dallas. "The verdict shows that, more often than not, juries get it right," said Mr. Capshaw.

The fracking verdict is the third multi-million-dollar jury verdict Matthews & Associates law firm was a part of in the last two months.