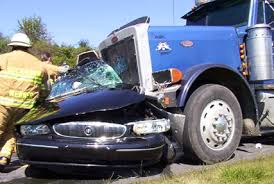 A Dallas jury awarded $4.1 mllion in damages to a 41-year-old Mississippi woman who was seriously injured when her pick-up truck rolled over after it was rear-ended by an 18-wheel tractor-trailer driver

The jury in Judge Emily Tobolowsky's court ruled April 24 that the truck driver, who had two previous rear-end collisions, was grossly negligent. The jury found that his employer, Greenwood Motor Lines, Inc., doing business as R&L Carriers, was also grossly negligent in failing to properly supervise and train the driver.

The collision near Weatherford, Texas on I-20 on the evening of Dec. 5, 2011 seriously injured Bobbie Bush and killed her two pet dogs, which were ejected from her vehicle. The truck driver was estimated to have been traveling at least 65 mph at the time of the collision.

Zehl, who acted as lead trial counsel on the case, said, "The verdict will enable Bobbie to try to get her life back on track and receive the medical care that she will need for the foreseeable future. The verdict shows that the people of Dallas County will hold even the largest trucking companies responsible when they allow unqualified and reckless drivers behind the wheels of deadly vehicles."