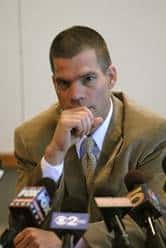 Jerry Hobbs, formerly of Zion, IL, was wrongly charged with the 2005 murder of his 8-year-old daughter, Laura, and her 9-year-old friend.

A father who was exonerated, after serving five years in jail awaiting trial for the rape and murder of his daughter and her friend, settled his legal claim against police authorities for $7.5 million in February 2014.

Jerry Hobbs, now of Wichita Falls, TX, was exonerated in 2010 after DNA evidence from semen in his daughter’s body matched that of a convicted killer who had lived in the Zion, IL, area where the murders took place.

Police arrested Hobbs in 2005 shortly after he reported finding his daughter, Laura, 8, and her friend Krystal Tobias, 9, stabbed numerous times and raped in a local park. Hobbs alleged that he gave a coerced confession after a grueling interrogation that stretched over 24 hours.

Hobbs’ attorney, Kathleen Zellner of Downers Grove, IL, a member of The National Trial Lawyers, said the settlement was, “a recognition of the brutality of the way he was treated.”

Prosecutors alleged that he was angry that his daughter was outside when she was supposed to be home. Lake County, IL, State’s Attorney Michael Waller said he was not convinced the Hobbs didn’t have a role in the killings.

The DNA match came back in 2007, but prosecutors ignored the evidence of his innocence for years while he was held in jail. A national DNA database provided evidence that matched Jorge Torrez with the murders. He is now serving five life sentences for for a series of attacks on women in the Washington, D.C. area, and faces trial in the Zion double murder as well as another woman's murder in Washington in 2009.

None of the municipalities acknowledged wrongdoing.