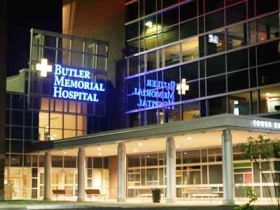 A jury awarded a Butler, Ohio, man and his wife nearly $9 million in damages, lost wages and future medical expenses on October 6 after a nightmare series of surgeries at Butler Memorial Hospital.

Todd and Beverly Wogan were awarded $8.78 million collectively after the couple filed suit in 2013, according to the Butler Eagle.

Todd Wogan had surgical procedures in 2012 that began with a procedure to repair an abnormal connection between his colon and urinary bladder. In the two months following the surgery, Wogan was in and out of the doctor’s office and BMH’s emergency room repeatedly.

Ultimately Wogan ended up at Allegheny General Hospital, where seven different surgeries were performed as doctors worked to repair damage to and infection of his abdominal cavity. Due to the stress of extended septic shock Wogan experienced, doctors at AGH had to amputate both of his feet as well as portions of fingers on his left hand.