Auto Design Causes 400 to Drown in Vehicles Per Year 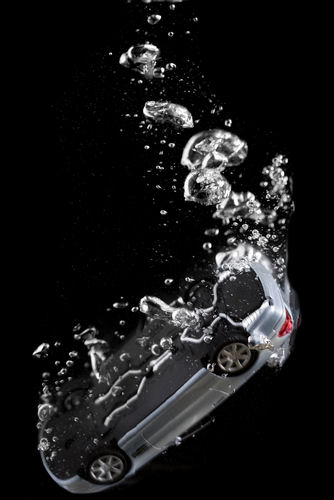 Vehicle submersion researchers have long known that design plays a pivotal role in determining both the length of time a vehicle will float horizontally before nosing down into the water.

On a cold October morning, the Indiana State Police Underwater Search and Rescue gathered by the bank of the reservoir in front of the barracks to drive a minivan and four other passenger cars into nine feet of water. The occasion was a state police rescue and recovery training exercise, and was covered widely by the local television news.

your email inbox by subscribing with the form on the right side of the screen.

[/sws_yellow_box]“I talk to police every day who don’t realize you have to get out of the vehicle as soon as it hits the water,” says Detective Robert May, leader of one of the ISP’s underwater search and recovery teams. “Movies still show the drama of the car filling up. That’s Hollywood, but that’s what sticks in people’s minds.”

After years of neglect, the issues of vehicle submersion and escape-worthiness are getting renewed attention from more than the entertainment industry: the National Highway Traffic Safety Administration (“NHTSA”), researchers, law enforcement and emergency management officials have begun conducting research, training and public education campaigns. Unfortunately, despite the fact that design choices can hamper or aid escape in a vehicle submersion, automotive manufacturers have been absent from these discussions. Vehicle escape can be affected by the type of glass in the side windows, a vehicle’s water-tightness, and the ability of power windows to work when exposed to water.

The Impact Of The Vehicle Submersion Problem

The mortality rate associated with vehicle submersion is among the highest of all single-vehicle crashes. Yet, the scope of the problem and the prospects for occupant survival are a matter of some debate.

Research published this year in Aviation, Space, and Environmental Medicine by Gerren K. McDonald and Gordon Giesbrecht, of the University of Manitoba, estimates that vehicle submersions cause about 400 fatalities in North America annually. Their review found that vehicle submersions account for up to 10 percent of all drownings in several industrialized nations, including the U.S., and determined that “many, if not most, victims die from drowning rather than from trauma.”

[sws_yellow_box box_size="550" box_align="right"]Get legal news for consumers delivered into your email inbox by subscribing with the form on the right side of the screen. [/sws_yellow_box]In 2011, NHTSA totaled up the number of annual incidences of drowning deaths resulting from motor vehicle crashes. The agency used 2004–2007 data from the Multiple Cause of Death (“MCoD”) file, produced by NHTSA’s National Center for Statistics and Analysis, and the Fatality Analysis Reporting System (“FARS”), and found an annual average of 384 traffic fatalities in which accidental drowning was one of the causes of death. (This dataset did not include MCoD data from Hawaii and Wisconsin. In addition, some fatal December 2007 crashes were not included because the death occurred in January 2008.) NHTSA, however, has suggested that a significant number of occupants in vehicle submersion crashes are already dead or severely injured by the time the vehicle entered the water.

NHTSA researcher Rory Austin reported that 63 percent of vehicle drowning fatalities involved a rollover and 12 percent involved a collision with another vehicle. The most common scenario was a single vehicle leaving the roadway, colliding with a fixed object and then rolling over before ultimately becoming submerged. He further reported that in cases where restraint use was known, the victim was unrestrained more than half the time.

When motor vehicle submersion deaths caused by flooding are considered, the number of annual incidents grows by at least another 60 deaths. According to Flood Fatalities in the United States, “[f]loods are the second-deadliest U.S. weather-related hazard.” Northern Illinois University researchers compiled a comprehensive flood dataset for a 47 year period spanning 1959–2005, and found 4.586 flood fatalities in the contiguous U.S. They concluded that, “[f]or all flood types, a majority of fatalities occurred in vehicles (63%).”

May and Giesbrecht agree that researchers have not captured the full extent of vehicle submersion deaths. The reason for this, according to May, is that there are many ways that a vehicle submersion may not make it into the crash statistics.

“The local police do not always make out an accident report if there is a drowning. If a drunk driver is arrested, they may treat it as a drunk-driving incident and recovery. If a fire department pulls a vehicle out of the water, that doesn’t get reported as a vehicle submersion crash,” May says. “I believe it’s underreported by half. There’s no doubt in my mind.”

Submersion advocate Mary Kay Kidwell is working on compiling a more comprehensive database of all submersion events with The Safety Institute. Kidwell got involved in the issue in response to the drowning death of her 17-year-old grandson, Trey Kidwell, who died in a June 2007 vehicle submersion crash. Kidwell was on his way home when he mistakenly turned onto a road that ended in an Indiana lake. Trey drowned inside and three of the four door handles were found to have been broken off. His companion was able to exit the vehicle from the window.

“This is our best next step,” says Mary Kay Kidwell, “[p]ut everything in a database and include more information from the circumstances noted in the police report.”

The Lessons And Emerging Trends From Vehicle Submersion Research

For example, a 1968 paper, Accidental Immersion of Vehicle into Farm Pond, described an incident in which a child who was alone in a 1966 Pontiac station wagon was able engage the gear, allowing the station wagon to roll 30 feet into a pond with a nine-foot depth. Swimmers nearby saved the child by pulling him out through the side windows. The paper observed that the vehicle went down nose first, that the rescuers had 20 to 30 seconds before the water reached the window level and that it was virtually impossible to open the car doors until the vehicle completely sank.

Similarly, in the early 1970s, researchers from the University of Oklahoma determined that escaping through the windows while the vehicle is still on the surface of the water is the best course of escape. This is especially true where the submersion occurs in deep water.

In 1993, the Michigan State Police issued the Submerged Transportation Accident Research (STAR) program report, based on 31 tests on 20 passenger cars and vans and one school bus to determine the opportunities for escape from sinking vehicles and the vehicle dynamics in water. The tests showed that occupants have a nearly two-minute to four-minute window of escape through the windows or doors. The side windows offered the best chance for escape, because it was impossible to open the doors until the water levels inside the car reached the door levels and the pressure equalized. Kicking out a rear window or windshield was impossible, but, electric windows and door locks continued to work, even if the car was submerged, the state police reported.

More recently, Giesbrecht’s empirical research divides a submersion event into three phases: (1) flotation, from water impact to water submersion up to the bottom of the side window; (2) sinking, when the submersion level rises from the side window until total submersion; and (3) submersion, when the vehicle is fully underwater. His tests also show that occupants can escape a submerged vehicle during the flotation phase by exiting through the windows. Based on his tests, Giesbrecht has been focused on rewriting emergency dispatch protocols in submersion incidents in a standing body of water, as well as in a flooding situation. He has also been refining an easily remembered set of instructions, “Seatbelts, Windows, Children, Out,” for a public awareness campaign. Too many victims, he says, waste critical escape time calling 911, or wait to attempt an escape under the misimpression that it is better to exit through the doors after the vehicle sinks.

Vehicle submersion researchers have long known that design plays a pivotal role in determining both the length of time a vehicle will float horizontally before nosing down into the water, and whether occupants have adequate time to roll down power windows.

In the 1970s, researchers noted the relationship between design and escape-worthiness:

"Crash worthiness and accident avoidance have been the subject of much research, effort and publicity over the past five years compared to the attention given to the problems of escape and survival in a post-crash situation. However, from the standpoint of traffic safety, escape worthiness must be recognized for its effect on vehicle design as related to crashworthiness. For instance, the door hinges and locking mechanism may perform adequately in preventing ejection during a crash, but that may make escape difficult."

In 1993, the Michigan State Police’s STAR report focused on improving vehicle buoyancy and keeping the vehicle horizontal on the water’s surface by: (1) improving the air tightness of the trunk seals so that air could not escape from the trunk; and (2) redesigning the air vent systems with baffles to keep water from intruding into the passenger compartment. They also recommended standardizing the size and location of seat belt buckles to allow a panic-stricken victim to easily unlatch the belt, and that hood assemblies be better secured, so that they do not detach and strike the windshield upon impacting the water.

May says modern vehicles are more watertight than they have ever been. Today’s escape-worthiness research is focused on continued operation of the electric power windows and the type of glass used in side windows.

By September 2017, automakers will be required to meet the requirements of the new Federal Motor Vehicle Safety Standard 226 Ejection Mitigation which would subject the side windows beside the first three rows of seats in motor vehicles to an impactor test. The impactor would be propelled from inside a test vehicle toward the windows, and the ejection mitigation system would have to prevent it from moving more than a specified distance beyond the plane of the window. NHTSA anticipates that manufacturers will meet the standard by modifying existing side air curtains, and possibly by supplementing them with laminated glass. Currently, most vehicles are equipped with tempered glass in the side windows. Window punch tools, such as ResQMe, can shatter tempered glass. Laminated glass, however, is shatter-resistant, and even specially designed tools will not penetrate it sufficiently to allow egress in a submersion.

Of more concern are new vehicle electronic systems. In older models, the power windows continued to work for some time after they were exposed to water. However, “[t]he new control systems, using a smart logic controller, when they get wet they will stop working and prevent you from using the electric window controllers,” Giesbrecht says. “How long it takes for them to fail is unknown.”

Even the currently underreported statistics reveal that vehicle submersion incidents cause or contribute to the deaths of hundreds of people throughout the United States each year. These deaths are not only tragic but often times preventable. Research over the past couple of decades has shown that the design of an automobile plays a key role in determining whether an occupant is able to survive a vehicle submersion incident. Despite these findings, manufacturers continue to produce vehicles with poor escape-worthiness design aspects, perpetuating the cycle of preventable drowning deaths.