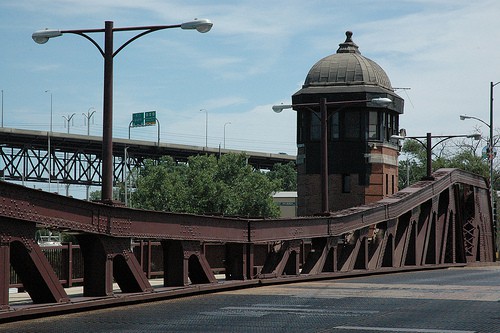 A crew was preparing to do tuck-pointing work on the 100th Street bridge house in Chicago.

A Cook County, IL, jury returned a $7.5 million verdict on September 4, in favor of the family of a City of Chicago laborer who was killed while working on January 27, 2009.

Julian Mitchell, age 37, was a 13-year veteran of the City of Chicago Department of Transportation, and was standing near the 100th Street Bridge on the southeast side of the City. His crew was preparing to do tuck-pointing work on the City's bridge house at that location.

While unloading materials from the City's truck, Mitchell was struck by a 22,000 pound, 18-wheel semi-tractor trailer rig operated by Dale Smith.  Mitchell was pinned between Smith's vehicle and the City truck, and he was dragged 20 feet across the bridge before coming to rest.  Mitchell died less than two hours later at Advocate Christ Hospital.

See our other Chicago reports:

Mitchell's family was represented by Dan Kotin, Tim Tomasik and Patrick Giese of Tomasik Kotin Kasserman in Chicago. The verdict found liability against driver Smith, Monica's Trucking, Inc. which owned the vehicle he was driving, and Z Force Transportation, Inc., the company for whom Smith was performing hauling services.

According to Tomasik, "Z Force Transportation attempted to escape responsibility by hiding behind clever independent contractor paperwork. The jury, through their verdict, recognized that Z Force was earning huge profits at the expense of the victims of this tragedy.  It took a two-week jury trial to hold that company accountable."

The trial was presided over by Circuit Court Judge Thomas Lyons, II.