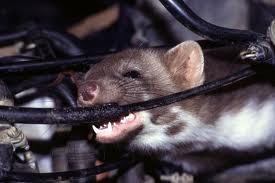 A recent consumer lawsuit claims an environmentally-friendly substitute used by Honda attracts unwanted rodents and animals that chew through the vehicles wiring.

The plaintiffs allege their 2012-2015 model vehicles used electrical wiring covered in a soy-based insulation instead of traditional copper wire with plastic coatings. One plaintiff claimed rodents chewed through his wires on two occasions, which left his vehicle unusable.

When he attempted to have it repaired, Honda refused to cover it under his standard 3-year/36,000 mile warranty even though the warranty stated it would “repair and replace any part that is defective in material or workmanship under use.” The complaint states the plaintiff had to pay for the expenses out-of-pocket.

Rabbit in the Engine

Plaintiff Delaney owned a 2014 Honda CrossTour, he also experienced shredded wiring after owning his vehicle for a short time. During a repair-- paid for out-of-pocket--the dealership found a rabbit in the engine compartment and “was still chewing through the wire while the car was at the dealership.”

According to the complaint, Plaintiff Rickard also found a rabbit nestled in his 2013 Honda Accord.

Through an online search, one plaintiff learned about rodent repellant tape sold by Honda. The plaintiff alleges the Honda dealership nor did Honda themselves offer the product.

The complaint highlights multiple charges paid by each plaintiff to repair their vehicles on multiple occasions. Although, the vehicles were still under warranty, the warranty was not applied to the repairs. One plaintiff paid $1,400 for repairs on at least two occasions.

As electrical wiring is an essential component of the vehicle plaintiffs allege the soy-based wire is insufficient to perform its intended function.

According to the complaint, many automotive blogs have discussed brands that use soy-based insulation. The wiring is said to be biodegradable and does not remain in the landfills. However, this environmentally conscious product remains a problem for the named plaintiffs and others who may join the suit.