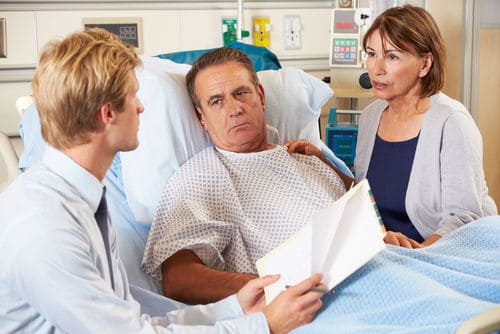 MICRA puts an artificial cap of $250,000 on pain and suffering damages in cases involving medical malpractice.

Governor Jerry Brown, who signed MICRA into law in 1975, later admitted that “insurance company avarice … was responsible for excessive premiums.” Insurance companies had suffered huge losses in the bear market of 1973–1974, and arbitrarily raised malpractice premiums to help cover their losses.

A phony crisis
The ensuing panic led the California legislature to overreact — instead of regulating the wildcat insurance companies, the legislature chose instead to punish the innocent victims of malpractice by instituting cap on noneconomic damages. Subsequently, in 1981, Travelers Insurance Company agreed to refund nearly $50 million that it had collected from California doctors’ after increasing malpractice premiums by 327%. Thus, the so-called insurance crisis was a phony crisis, caused by insurer greed rather than by an over proliferation of malpractice lawsuits.

Subsequent legislation prevented the unfettered manipulation of rates by insurance companies, further rendering MICRA an obsolete relic. In 1988, Proposition 103 gave the Insurance Commissioner the power to regulate malpractice insurance rates. As a result, the premium spikes of the 1970s that gave rise to MICRA could not happen again. Today, insurance providers are reaping record profits and surpluses — so much so that California’s elected Insurance Commissioner Dave Jones in 2012 ordered a rate review under the rules of Proposition 103 that forced medical malpractice insurance firms to substantially lower rates. Since Commissioner Jones took office in 2011, he has ordered nearly $44 million in medical malpractice premium refunds.

However, MICRA has been on the books for too long. For the Consumer Attorneys of California, we are at the time when we must take a stand. For a variety of good and justifiable reasons we delayed confronting the MICRA issue long enough. Today we choose to turn and fight not because it is the popular or the easy thing to do but because we have to face our responsibilities and obligations.

We also know that our enemies have grown strong with time. They have built incredible coalitions and unholy alliances. We know that they spew lies and make up facts and statistics to keep their death grip on this cap. We know that the real-world effect of the cap is the near elimination of medical malpractice wrongful death cases for children, senior citizens and non-income earning adults. That means that killing a mentally challenged adult is not actionable. How can we continue to stand by and let this happen?

During the same time period we know that the medical board of the State of California has miserably failed the people of our state. While the State Bar of California aggressively goes after bad lawyers, the medical board and its investigators have become something akin to Nancy Drew, the Hardy Boys and Abbott and Costello all rolled into one. They rarely prosecute bad doctors and even more infrequently take a doctor’s license away. The stories of average Californians being let down by the Medical Board could fill volumes.

The practice of medicine has wildly changed in 38 years. A generation ago most doctors practiced like Marcus Welby. They ran small personal private practices that catered to their patients. Today, over 70% of those insured in California receive their healthcare through managed corporate health organizations. That means that non-doctors and corporate officers are ultimately making decisions about your medical care.

We also know that although it should be easy to track the number of prescriptions doctors issue a patient, the available technology is rarely used. For example, several efforts to fund and implement a statewide database of patient prescriptions has been consistently rejected by the medical establishment in part because it would add four or five dollars a year to their bi-annual license fee. Meanwhile, we know that the overprescribing of patients routinely kills or severely injures people.

Now our enemies in this fight are truly odd. We should not be at crossed swords with most doctors. More often than not our members should be working closely with them to make certain that our clients get the best care and fair compensation when they are injured through the negligence of another. But those decent doctors are brainwashed by the insurance companies and large corporation. The reality today is that the corporate insurance companies run the medical establishment and they have led the doctors into believing that the world will come tumbling down around them if there is an increase to the MICRA cap.

Over the last decade the same corporate whores have been telling progressive legislators that any changes to MICRA will close community health care clinics serving the poor and underserved rural and urban neighborhoods. Unfortunately, they didn’t bother to check the recent changes to federal law mandating that the federal government defend and indemnify any community healthcare clinic that receives federal funding. Well over 90% of all community clinics have opted into this program, meaning they never have to purchase malpractice insurance and they never have to worry about defending themselves in a medical malpractice case because the federal government does it for them in federal court.

Meanwhile, the good members of this organization have worked hard to elect pro-civil justice legislators who candidly admit almost to a person that MICRA is wrong and needs to be changed — but collectively feel unable to do anything because of the lobbying efforts and deep pockets of the doctors and the insurance industry.

You see, MICRA is important because it defines who we are. We have some members who don’t view themselves as medical malpractice lawyers and don’t want this fight. That is wrong. This great organization stands for access to justice for all Californians not just those that we represent in our practice niche. We have to be concerned with patient safety; we have to do something to change the conversation. Otherwise, how can we look at ourselves in the mirror?

As of the writing of this, a team of strategists and a coalition of concerned people outside of our legal community are working with us to implement a multifaceted strategy and to fight. This team is currently collecting the 504,760 signatures needed by March 24 to put an anti-MICRA initiative on the November 2014 ballot. This initiative, no. 13-0016, is entitled “The Troy and Alana Pack Patient Safety Act of 2014.”

Its main sponsor, Bob Pack, was the father of Troy and Alana, who were senselessly killed by a driver high on painkillers prescribed by several doctors. If passed, the initiative would require drug and alcohol screening of doctors, as well as adjust the $250,000 MICRA noneconomic damages cap to account for inflation. The Consumer Attorneys of California believe that the fight over the ballot initiative will cost $10 million. Already, however, Timm Herdt of the Ventura County Star reports that the doctors and insurance companies have bankrolled opposition to the ballot initiative, to the tune of $31.5 million dollars. Observers believe that if the initiative acquires the necessary signatures, there could be a $60 to $80 million campaign next year.