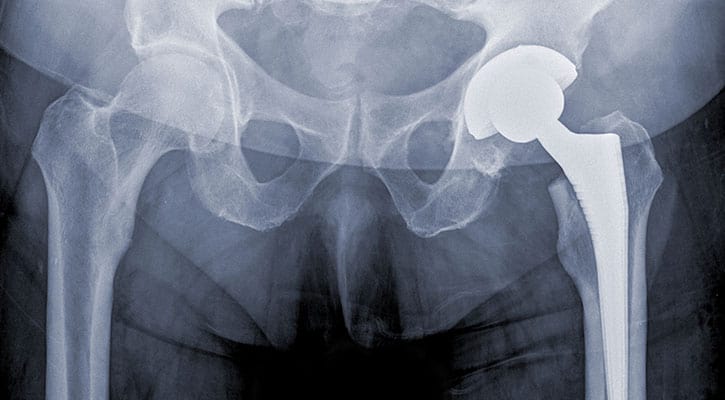 In a major success for plaintiffs, a Chicago judge granted a new trial in the case of a woman who had a defective DePuy Orthopaedics ASR XL hip implant replaced. This reversed a 2013 defense verdict.

Cook County Circuit Judge Deborah Dooling ruled that plaintiff Carol Strum was entitled to a new trial because testimony by one of her expert witnesses was wrongly excluded. Strum had the device implanted in 2008 because of arthritis in her left hip. In 2010 DePuy recalled the ASR artificial hip. After suffering pain, Strum had replacement surgery in 2011.

Johnson & Johnson and DePuy Orthopaedics have been named defendants in more than 9,000 hip replacement lawsuits involving an all-metal Pinnacle hip that utilizes the Ultamet liner.

Plaintiffs charge that this configuration is prone to wear, which can cause the device to shed dangerous amounts of toxic metal debris into the tissue surrounding the joint, as well as the bloodstream. This can lead to metallosis, pseudotumor formation, adverse local tissue reactions, and other debilitating complications that result in premature failure of the device.

They further allege the all-metal Pinnacle suffers from the same design flaws that prompted the 2010 recall of DePuy's metal-on-metal ASR hip implants, and question why the Pinnacle implants were not subject to a similar recall.

In separate litigation, there are 1,641 cases against DePuy Orthopaedics over its ASR Hip Implant in Ohio federal court before US District Judge Jeffrey J. Helmick in MDL 2197.

The federal multidistrict litigation underway in Texas concluded its first DePuy Pinnacle bellwether trial in October 2014, with a verdict for the defense.

In March 2016, the litigation's second bellwether trial concluded with a verdict in favor of five Pinnacle plaintiffs and a total award of $500 million. However, damages were reduced to $151 million to comply with Texas law governing punitive damages.

The litigation's third bellwether trial concluded last December when $1 billion was awarded to six Pinnacle hip recipients. However, that verdict was reduced to $543 million.

In 2013, DuPuy announced a $2.5 billion settlement resolving about 8,000 cases of patients who had revision surgeries as of Aug. 21, 2013. It does not cover the Strum case, because it went to trial before the settlement was announced.