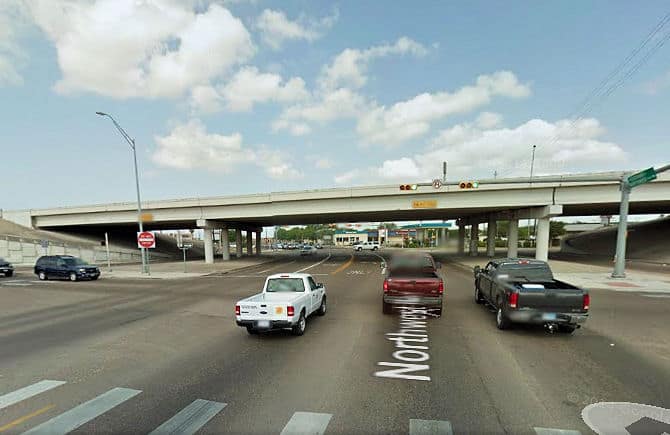 The scene of the accident: Route 624 near entrance to Interstate 77.

CORPUS CHRISTI, Texas -- A young man who was paralyzed in a company vehicle accident recovered a jury verdict of $67.4 million.

The auto accident occurred on August 28, 2012 when Christopher J. Arnold was a passenger in a Ford SportTrak vehicle traveling on FM 624 (Northwest Blvd.) near Calallen, Texas.

The vehicle Arnold was traveling in made a U-turn onto the freeway in front of a van, thereby causing a collision. Arnold's vehicle was then struck a second time by a 2009 Chevrolet Silverado pickup driven by Robert Earl Sims, an employee of Weatherford, U.S., L.P.

Attorneys for defendants Robert Earl Sims and Weatherford argued the driver of Arnold's vehicle, who made the U-turn, was responsible for causing a chain reaction collision. Furthermore, the defense argued that Arnold was not wearing a seat belt, thereby causing his own injuries.

In both the opening and closing arguments, Thomas J. Henry stated to the jury:

Arnold sustained neck and back injuries, vertebral fractures, spinal cord injuries, a brain bleed, a collapsed lung, lacerated spleen, and rib fractures. He remains paralyzed from the waist down.

Although liability was disputed in the case, it was ultimately determined that Robert Earl Sims and Weatherford, U.S., L.P. were at fault for the accident. The jury found that the accident resulted from negligence and gross negligence and awarded Thomas J. Henry Injury Attorneys' client a total of $67 million.

'We have seen time and time again how drivers operating company vehicles can cause serious injuries,' Thomas J. Henry stated.

'We are pleased that the jury was able to recognize how this company's failure to enforce proper safety protocol was to blame for this accident. I sincerely hope that verdicts like this will keep our families safer on the roadways,' Thomas J. Henry added.