Chimpanzees in New York Get a Show Cause Hearing 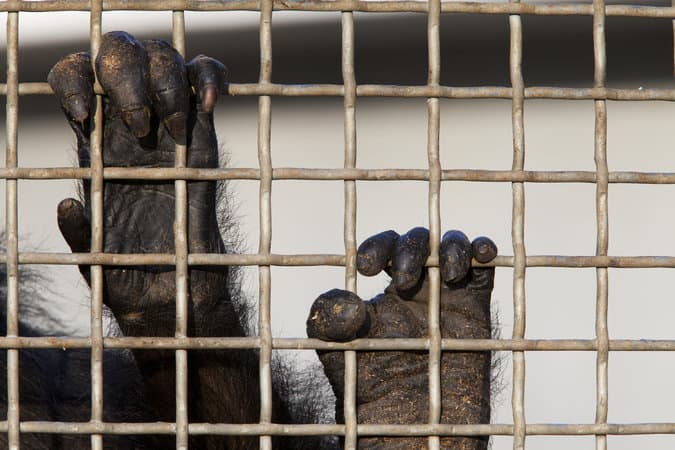 Two chimpanzees will have their day in court now that a New York judge has ordered Stony Brook University to show cause why the simian plaintiffs should not be transferred to a sanctuary.

The Nonhuman Rights Project, an animal rights group, has been working through the court system seeking to confer legal status upon nonhuman animals since 2013. It came the closest to achieving its goal on April 21, 2015 when New York Supreme Court Judge Barbara Jaffe granted the hearing.

The NhRP filed the case on behalf of chimpanzees Hercules and Leo as part of a trio of cases the organization has brought in an attempt to free chimpanzees imprisoned within the State of New York through an “Article 70-Habeas Corpus” proceeding. Hercules and Leo, with the help of the NhRP, garnered unprecedented results. This is the first Order to Show Cause that has been issued as a result of the NhRP's efforts, as well as the first issued for any nonhuman animal.

The NhRP was also hoping to retain the Writ of Habeas Corpus initially granted by the court. Judge Jaffe amended her April 20th “Order to Show Cause & Writ of Habeas Corpus” on April 21, 2015, by literally striking through the words “& Writ of Habeas Corpus,” making it unclear whether the chimpanzees have standing to challenge their detention. NhRP claims Hercules and Leo are too cognitively and emotionally complex to be held in captivity and should be relocated to an established chimpanzee sanctuary.

The ruling compels representatives from Stony Brook University, one of the named defendants along with University President Samuel L. Stanley, Jr., M.D., to provide a legally sufficient reason for keeping Hercules and Leo. Stony Brook will likely argue the well-established legal principles that regard animals as property, or chattel, which cannot possess such fundamental rights as bodily integrity and bodily liberty.

The court has made no decision on whether Hercules and Leo deserve to be treated as legal persons, and Stony Brook University has made clear it will not comment while awaiting the court's “full consideration on the matter.” The NhRP, however, has responded to the amended order, saying:

However the state trial court, the Supreme Court, rules -- the upcoming hearing likely will not be the end of this lawsuit or this new era of proposed rights for animals. This hearing alone is a significant step that could lead to nonhuman animals gaining more legal standing. This lawsuit has been traveling through the New York court system for a little over one year, and can be appealed all the way to New York's highest court, the Court of Appeals.