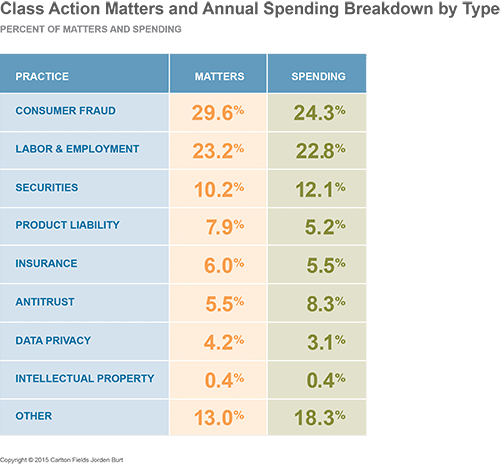 Across industries, companies spent $2 billion defending class action lawsuits in 2014, slightly less than the $2.1 billion they spent in 2013, according to the 2015 Carlton Fields Jorden Burt Class Action Survey. This year, spending is expected to return to 2013 levels.

Insurance and data privacy matters emerged as significant areas in 2014, making up 6 percent and 4.2 percent, respectively, of class actions handled. At the same time, the percentage of labor and employment, product liability, securities, and antitrust class actions dropped.

While data privacy matters currently represent a small portion of class actions, when corporate counsel were asked what area they saw as the next wave, they most often identified data privacy. And, while class certification has been a stumbling block for plaintiffs in this area, the following factors suggest data security matters are nonetheless poised for growth:

Corporate counsel also expect a wave of consumer fraud class actions, even though these are already prevalent.