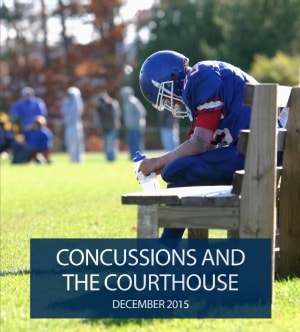 These protections are largely a result of the increased awareness surrounding traumatic brain injuries nationwide. Due to recent high-profile litigation, including suits against the National Football League, more understanding of the long-term impacts of concussions now exists.

According to the David Ratcliffe, a researcher with the AAJ, it is only recently that a widespread change in attitude surrounding concussions and traumatic brain injuries has occurred. Ratcliffe, the of the new AAJ concussion report said, “More players, parents, coaches, and schools are aware today more than ever before of the risks associated with head trauma. This dramatic change in culture is largely due to high-profile litigation against colleges and the NFL that has continued to push for accelerated changes, as opposed to the incremental change the AAJ has seen over years past.”

As many as 3.8 million sports-related injuries occur each year and concussion management overall is still inadequate. The AAJ issued a report to raise further awareness titled Concussions and the Courthouse. The AAJ will continue to advocate for better risk-management and better concussion care.

Jason Luckasevic, a Pittsburgh attorney, brought concussions in sports to international attention when he filed the first two lawsuits against the NFL in 2011 on behalf of more than 200 NFL players. Luckasevic’s neuropathologist friend, Dr. Bennett Omalu, discovered a specific form of brain disease common in NFL players.

Luckasevic hopes to protect all athletes – including millions of children – to avoid repeated head trauma. “There is a need to make sure athletes are not at risk of chronic brain damage due to chronic carelessness of leagues,” Luckasevic told NTL.

“Today, we continue this conversation to not only protect those former NFL players, but also all athletes – including millions of children – involved in contact sports, so that they can avoid this public health concern involving repeated head trauma,” said Luckasevic.

Leonard Marshall, a former NFL player for teams including the New York Giants, believes it’s his “duty, honor, and privilege to eradicate TBIs (traumatic brain injuries).” Marshall played in the NFL for twelve years and was a two-time Super Bowl champion.

Once a former All-Pro defensive lineman for the Giants, Marshall was diagnosed with signs of Chronic Traumatic Encephalopathy (CTE) and became a sports safety spokesman to raise head trauma awareness. For more than eight years, he has been committed to trying to make a difference with the goal of making it safer for kids to play tackle football.

Marshall formulated a platform to reach America’s youth and parents called the Brain Unity Trust, a non-profit organization combined of medical experts, attorneys and player. Brain Unity Trust is the “first of its kind” and advocates awareness for all sports and athletes, including cheerleaders, who Marshall says “may also suffer from TBIs while participating in sports.” Find out more info at Brain Unity Trust and PracticeLikePros.com.

Marshall told the NTL, “There’s all this education out there about the risk of drinking, drugs, and sexual contact . . . these are all things that should be understood. However, TBIs should be understood, studied and talked about with the same compassion.”

Victor Lystedt experienced every football parent’s worst nightmare when his son Zachary suffered a concussion during a football game one Friday night. Zachary Lystedt went down hard during a game and was directed to sit out for two plays before being thrown back into the game. Several minutes later, Zachary became unconscious while playing and was airlifted to the nearest hospital. Lystedt’s son began rigorous physical therapy, and the Lystedt family was devastated when Zachary could not even talk for the first nine months.

“People must understand youth athlete’s brains are totally different than adult brains, and heal totally different . . . they need time. Understanding concussion management is key to keeping your kid safe,” Lystedt told the NTL. “Once we were able to use all the lawyers and the experts to identify why our son was hurt, I now feel it’s my duty to call upon parents to understand this nationwide. This is an important education piece in regards to football and all sports.”

The NTL also spoke with Richard Adler, the attorney for the Lystedt family and the drafter of the “Zachary Lystedt Law,” the first of its kind. Adler, who is based in Washington, told NTL,

“Education is the primary focus to start. An education campaign in the state of Washington still resulted in many soccer, lacrosse, and football injuries statewide. We realized education was only going so far and didn’t have the stickiness we were hoping would stay with the school administrators and parents.”

When in Doubt Sit Them Out

That’s when Adler drafted Washington’s When in Doubt Sit Them Out law. Adler’s legislation campaign garnered a lot of support from doctors and Seahawks players and fans. The law passed on May 14, 2009 and since then, all states have adopted similar principles.

“When a player is suspected – not diagnosed – they must be removed and cannot return to play until a release by a medical professional is given. Then, there must be a graduated return to full play. We are still finding that many youth athletes across the country have died. Ages of eighteen and under are when athletes see issues of Second Effects Syndrome. A TBIs are truly traumatic. The CDC in 2002 called them a ‘silent killer’ before Congress.”

Adler also said, “Mandatory parent-meetings is an idea I’m still working with. We need to change the culture of sports. Coaches need to know parents are involved and parents need to attend school meetings and hear presentations.”

According to Adler, “Another next step is a call for national legislation. All states have concussion laws. Bicycle helmets, motorcycle helmets, and seatbelt laws are not even in all 50 states!”

Adler believes sanctions to hold coaches accountable are also invaluable tools for raising concussion awareness and protecting our country’s athletes. “Coaches all too often look the other way because of the culture of the sport,” Adler pointed out.

“We want to strengthen parental notification, which is already in place in six states and is a very simple thing to do. Parents nationwide should push states to add this to state laws where it is not already in place. These laws generally only cover high school, but a lot of these head trauma problems expand to middle school and even elementary school. We need a push for state laws instead of a nationwide practice of avoiding them.”

Leonard Marshall has a message for those who believe concussion and TBI advocates are merely trying to kill football:

“Grow up. This is a contact sport and you’re in the air often with the potential to fall on your head and then contract a traumatic brain injury. I’ve come across a number of different people in my field – Hall of Famers and accountable football players – who have legitimately experienced this stuff and have seen the lack of responsibility and accountability firsthand. This stuff is going to happen. In fact, it’s going to happen to more kids between ages 8-18 because of the fact that the brain is not fully developed. When you smash into each other at a high rate of speed with improper equipment or improper coaching, the risks get greater. It’s only inevitable that over time, if we don’t make changes now, it’s only going to get worse.”

Marshall pointed out the example of Buddy Teevens, head football coach for Dartmouth University. Marshall believes Teevans has a genuine understanding of head injuries and a great approach to protecting his players. “The least amount of time spent practicing on the field actually leads to the most results and better games. It’s all about playing the game in a manner that you don’t go out on the field with the goal to maim or personally injure someone else. Athletes need to play with physicality but also with safety concerns. I’m very proud of Teevens’ football program,” Marshall told NTL.

As a parent who has experienced firsthand the heartbreak of a traumatic brain injury suffered by his child, Lystedt often receives the question, “Would you ever let your son play football again?” His answer is a resounding, “Yes. Why wouldn’t I? It’s the safest the game has ever been. It’s more talked about now, and it’s looked at with an objective eye so much more than it ever has been.”

“We’re not all the way done, though. We just had a boy die here in Washington State which is a very sad thing. I know we need to do a whole lot more when it comes to the educational aspect. My son battled for his life . . . battled really hard, for a long time. I think the reason he survived is the warrior attitude that sports gave him. He’s been doing sports all his life, and now his sport is to recover and get better. He’s motivated internally to get better every day. I think with the proper coaching and management of any sport, we can keep it a lot safer. I don’t think there’s any piece of equipment that can stop a concussion if it’s going to happen. I think what we can do is manage it thereafter and give our child the full time needed to recover and monitor this recovery by the proper people in the medical field, while educating parents, coaches and teachers. The opportunity to play a sport is a very great thing to give a kid and I wouldn’t want to take that away from any one of them.”

To view a copy of the AAJ’s full report, visit Concussion.Justice.org.