Construction Worker Recovers $5.5M Because Worksite Had No Ladder 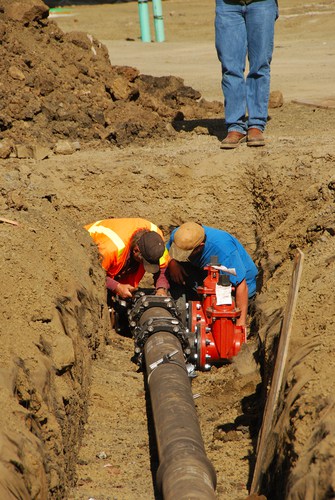 The general contractor failed to meet its responsibility by failing to provide the plaintiff with a ladder.

A jury in The Bronx awarded a construction worker $5.5 million to compensate him for severe back injuries he suffered when he fell backwards into a trench from a support beam. The injury happened for want of a ladder at the site.

Gilbert Hernandez, 46, had worked for Danella Construction of New York for about a year and was on the job on October 11, 2008 at an excavation site in the Bronx where a new gas main was being installed.

His job was to inspect the pipes in a trench after they were welded together. He finished an inspection and climbed onto a wooden support beam that was supporting the trench walls. The beak broke and Hernandez fell backwards, injuring his back and lower leg.

The defendant claimed that a ladder was provided and the plaintiff simply failed to used it. But the jury rejected this defense, and found in favor of the plaintiff on all issues on June 2, 2014.

The injury left Hernandez permanently disabled from working. After 14 months of conservative care, he underwent a spinal fusion. This ultimately failed and he underwent two additional surgeries to his lower back.

He has a bone stimulator that is as large as an iPhone inserted into his hip that sends electrical signals up his spine. Hernandez describes the sensation as being "stabbed from the inside." He also suffers from bouts of serious depression and struggles with the side effects from the pain medications, which has caused his family life to disintegrate. He is the father of two children.