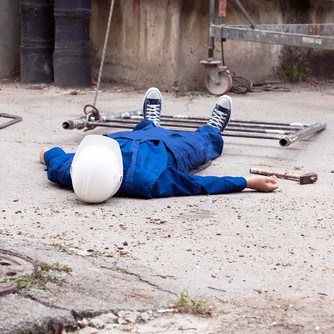 A 35-year-old construction worker in California recovered a $2.7 million settlement for a severe brain injury he suffered when a defective scaffold he was working on broke apart, causing him to fall 20 feet.

Rosbil Nunez-Aguirre of Orange County, CA, was handing some wooden planks to his coworker when one of the brackets suddenly broke. He broke his jaw and ankle and lost consciousness when he hit the ground.

He was represented by Roger E. Booth, a member of The National Trial Lawyers Top 100 Attorneys, and Carly L. Sanchez of Booth & Koskoff in Torrance, CA.

The plaintiff suffered a profound frontal lobe traumatic brain injury in the 2013 collapse, causing a personality change that made him have fits of anger and destructive behavior. He did not want to leave the house, had difficulty with memory and concentration and was placed in an outpatient program at a rehab hospital for nine months.

The defendants included the distributor of the defective scaffolding -- White Cap Construction Supply, Inc. -- and its parent company HD Supply, Inc. This particular bracket scaffolding, called the Whalen-Jack, was designed by a contractor in South Dakota who had no background in engineering. He subsequently sold the design to JD Systems, a company that outsourced the manufacture to a facility in China. The defendants sold the bracket scaffolding nationwide.

Plaintiffs contended that the Whalen-Jack was defectively designed and manufactured.  The brackets were supported by two welds, with no redundancy or backup margin of safety, and the design was such that the welds could not be seen or inspected.  If the welds failed (as they did at the time of the incident), the entire structure would come down.  Moreover, the quality of the welding performed in China was poor.

During discovery, plaintiffs’ counsel uncovered the fact that the design of the Whalen-Jack was changed at some point prior to the subject incident, to provide some redundancy in case the critical welds failed.  Plaintiffs contended that this was done specifically to address the very design problem that led to the incident.  Moreover, discovery showed that, despite the design change, none of the old Whalen-Jacks were recalled, and, in fact, old units that were still sitting in warehouses continued to be sold, including the one involved in the incident.

Plaintiffs contended that White Cap and HD Supply) were liable, under strict liability principles, for having sold a defective product.  Moreover, plaintiffs argued that White Cap was negligent because it failed to perform any meaningful due diligence concerning JD Systems or the Whalen-Jack, but nevertheless represented the product as being “safe” and “rugged.”  The principals of JD had no prior experience manufacturing or selling products of any kind and exercised no control over the manufacturing process in China.  White Cap knew that JD’s methods for shipping Whalen-Jacks from China were shoddy and could result in damage to the product.

Defendants contended that the subject Whalen-Jack bracket was not defective in design or manufacture, as evidenced by the fact that there was no report of any other Whalen-Jack bracket ever failing.  JD Systems performed testing of the product before beginning to sell it in the early 2000's, and defendants’ mechanical engineer performed testing of an exemplar bracket.  According to the defendants, this testing showed that the Whalen-Jack could withstand repeated use, under normal conditions, without failing.

Defendants contended that the subject bracket failed because of misuse and abuse by plaintiff’s employer, Circle M Contractors.  Defendants’ metallurgist opined that the failure was the result of Mr. Nunez-Aguirre jumping on to the scaffolding just before the failure.  Defendants’ mechanical engineer opined that the failure happened gradually over time, most likely as a result of Circle M employees hitting the bracket with hammers and/or dropping it to the ground when removing it from buildings.  Defendants asserted that there was visible damage to the bracket before the incident and that Circle M should have noticed this damage and removed the bracket from service.

In addition, defendants argued that, as a distributor, they do not have a duty to test every product that they sell or investigate every manufacturer with whom they do business and that they were not aware that there was a pre-incident change in the design of the Whalen-Jack.

Settled on the brink of trial

Mediations were held before Michael Moorhead at Judicate West in February and November 2016, which did not result in a settlement, but the case subsequently settled on the brink of trial through follow-up discussions with Mr. Moorhead.