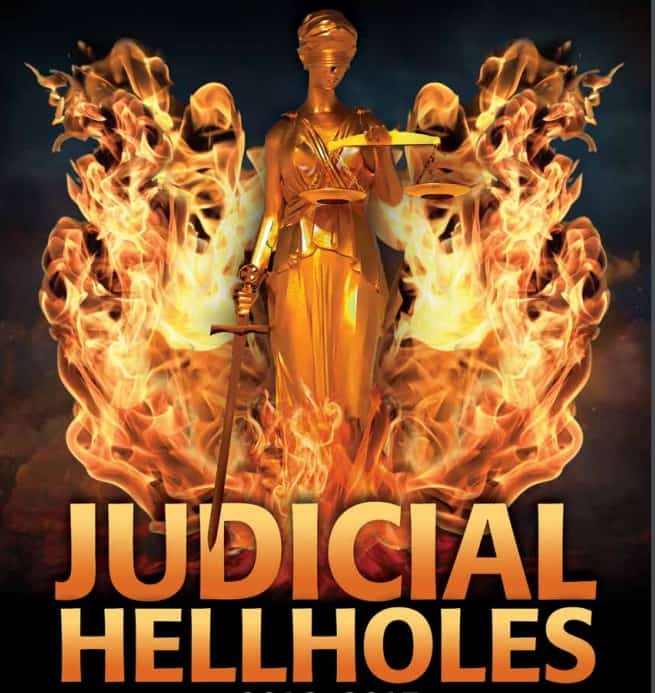 The pro-defendant propaganda group, the "American Tort Reform Association" issued its latest list of "Judicial Hellholes" for corporate defendants. The jurisdictions are where plaintiffs have had the best success holding major drug companies and makers of defective products responsible.

Linda Lipsen, the CEO of the American Association for Justice, trivialized the annual report as a "publicity stunt." She said it "has been ridiculed, debunked, and exposed as nothing more than propaganda paid for by corporations seeking to evade accountability for wrongdoing."

The report gives an insight into the paranoia and frustration of the anti-consumer organization. Check the list below to see if your clients have recovered damages in one of these 10 jurisdictions:

#1 CITY OF ST. LOUIS, MISSOURI. The City of St. Louis is a magnet for product liability lawsuits and consumer class actions. The local trial court hosted three gigantic verdicts this year, totaling $197 million, in cases asserting that talcum powder causes ovarian cancer, plus other multimillion-dollar awards. The recipients of these awards, and most of the individuals filing these types of lawsuits, are not from St. Louis, or even Missouri. They travel from across the country to sue in St. Louis. Why? The state’s weak venue law and a lenient standard for expert testimony that allows “junk science.” Plaintiffs’ law firms have tainted the jury pool by inundating St. Louis residents with constant television advertising.

#2 CALIFORNIA. The Golden State is indeed that for personal injury lawyers seeking riches at the expense of employers, consumers and taxpayers. Lawmakers, prosecutors and judges have long aided and abetted this massive redistribution of wealth. By enacting more than 800 new laws every year, legislators and the governor make it all but impossible for California residents and businesses to stay current and thus avoid being targeted by the nearly 1 million new lawsuits filed there annually. And when the state’s highest court effectively invites out-of-state plaintiffs to sue out-of-state defendants over alleged out-of-state injuries in California courts at state taxpayers’ expense, no one can be surprised that often preposterous lawsuits over workplace rules, pay-stub formatting, food and beverage labels, imaginary environmental hazards, disability access and novel public nuisance theories proliferate and act inexorably to expand civil liability.

#3 NEW YORK CITY ASBESTOS LITIGATION. The conviction of former New York Assembly Speaker Sheldon Silver, who moonlighted at an asbestos law firm, and the replacement of Justice Sherry Klein Heitler, who was known to give “red-carpet treatment” to the plaintiffs’ bar should have begun the process of restoring fairness to the Big Apple’s asbestos court. It hasn’t. Defendants are presumed guilty unless proven innocent. They face liability beyond their level of responsibility. And judges combine multiple lawsuits into a single trial, blending evidence, confusing jurors and driving up awards. Parties await a new case management order, but defendants expect the worst, including the reintroduction of punitive damages long sought by plaintiffs’ lawyers.

#4 FLORIDA SUPREME COURT AND SOUTH FLORIDA. The Sunshine State’s highest court continues a long record of liability-expanding rulings and decisions that rewrite and invalidate laws that do not fit the policy preferences of a majority of the court’s members. This year’s decisions increase workers’ compensation costs and subject to new liability employers, state agencies and even those who call police for help. South Florida, in particular, is known for its aggressive personal injury and consumer litigation bar, and troubling alliances between lawyers, shady medical clinics and service providers that run up expenses for lawsuits.

#5 NEW JERSEY. The Garden State’s high court has declared war on the use of arbitration as an alternative to lawsuits and issued liability-expanding rulings. While Atlantic County is no longer the draw it once was for product liability claims, the state’s lax standard for expert testimony still leads plaintiffs’ lawyers to bring many drug and medical device cases there on behalf of people from other states. In addition, the state’s vague and complicated consumer protection laws have set off a feeding frenzy for plaintiffs’ lawyers.

#6 COOK, MADISON AND ST. CLAIR COUNTIES, ILLINOIS. These three Illinois counties have long been go-to places for filing lawsuits. Whether it is medical malpractice, product liability or disability access lawsuits, Chicago is the wrong place to defend a case. Meanwhile, largely rural Madison County is still the nation’s epicenter for asbestos lawsuits. That it is the place of choice for plaintiffs’ firms is unsurprising given the close relationship between the judiciary and local lawyers, and a deck that is stacked against defendants. Its troublesome neighbor St. Clair County also hosts more than its fair share of litigation. Its judges have manipulated the judicial selection system to remain on the bench. The state’s expansive liability laws and the influence wealthy plaintiffs’ lawyers exert on state politics further concern defendants.

#7 LOUISIANA. Louisiana has a reputation for plaintiff-friendly venue laws, permissive judges, double-dipping asbestos lawsuits and trust claims, the highest jury threshold in the nation, abuse of consumer protection laws and excessive jury verdicts. But it is the governor’s attempt to hire campaign contributors to run multibillion-dollar coastal erosion litigation against the state’s key energy industry that ensured the Pelican State’s ranking among Judicial Hellholes this year.

#8 NEWPORT NEWS, VIRGINIA. This shipbuilding town stands out in a state that is otherwise viewed as having a balanced litigation climate. The court’s plaintiff-win rate in asbestos cases is the highest of any jurisdiction in the U.S., thanks to broad interpretations of maritime law and one-sided evidentiary rulings that make it difficult to mount a defense.

#9 HIDALGO COUNTY, TEXAS. It’s hailing lawsuits in this agricultural county along the Rio Grande, as plaintiffs’ lawyers file thousands of lawsuits accusing insurers of not paying up for storm damage. As a result, insurers are leaving and premiums are climbing. Judges are wising up to the game and beginning to call out lawyers for bringing groundless cases, and lawmakers are poised to enact much-needed reforms.

For a satisfying chuckle, read the full text of the report.