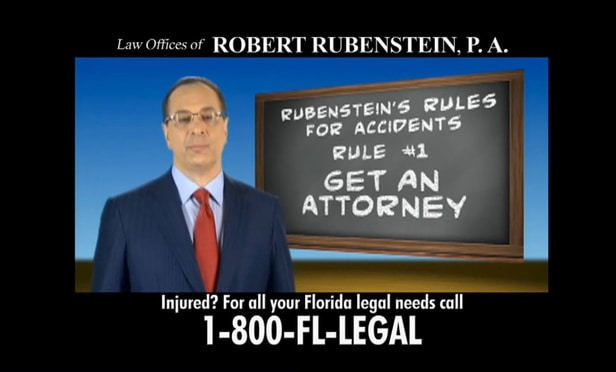 A federal judge threw out state ethics rules that ban the use of past results in lawyer advertising in indoor and outdoor display, television and radio media. The court held that the rules were unconstitutional and in violation of the First Amendment.

The landmark ruling on December 12, 2014, rejected the Florida Bar's efforts in a state with 68,500 attorneys. The court granted the plaintiff law firm's motion for summary judgment, and went on to enjoin the Bar from enforcing Rules 4-7.13 and 4-7.14, which said use of past results is misleading.

The court cited the Florida Bar's own research:

The plaintiffs developed, at great expense, an advertising campaign featuring information regarding past recoveries for clients. The ads include a TV segment animated with a cartoon car accident, a courthouse and dollar signs drawn on a dry-erase board. With an attorney voice over, it depicts the words:

“COLLECTED OVER $50 MILLION FOR THEIR CLIENTS IN JUST THE LAST YEAR!
Gross proceeds. Results in individual cases are based on the unique facts of each.

Ruling in favor of the law firm, the court ruled there is First Amendment protection for lawyer advertising as commercial speech. It noted that the ethics rules in 44 states impose no blanket restrictions on references to past results.

For more, click to read Court Throws Out Florida’s Lawyer Advertising Rules on Use of Past Results