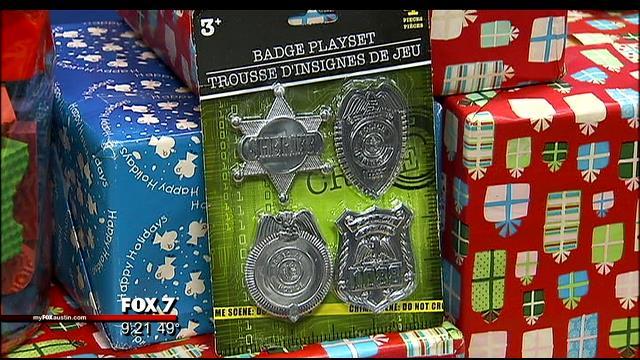 Before giving little Martha that Dora the Explorer backpack or mailing Tiny Tim a sheriff's star badge playset for Christmas this year, stop to consider the toxic hazards these seemingly harmless toys could pose. Despite recent progress in children's toys, particularly holiday toys, consumers must still be wary when shopping this holiday season.

A recently published study in the Clinical Pediatrics journal showed a dramatic increase in toy-related accidents in the last 25 years. With Christmas 2014, just days away, awareness of these toxic safety hazards is critical.

Incredibly, toxic toys can still be found on toy store shelves, according to the 29th Annual Trouble in Toyland report released by Arizona PIRG, which includes a list of 24 extremely dangerous toys. At the top of the toxic toys list is the sherrif's star and special police badge playset, with each badge containing excessive lead, measuring above 110 ppm. But that's nothing compared to the Dora the Explorer backpack, which totals out at 200,000 ppm DEHP and 3,000 ppm DINP, both of which are banned in amounts above 1,000 ppm.

The Trouble in Toyland report advised against hazards most parents are already familiar with:

Watch out for common hazards

We need to protect our youngest consumers from unsafe toys. Parents and caregivers should be aware of some of the most common toy hazards.

“Consumers should be able to trust that the toys we buy are safe. However, until that is the case, parents and other consumers need to watch out for common hazards when shopping for toys,” said Shaina Shay, a representative for the Arizona PIRG Education Fund. “Policy makers need to do more to protect children from the hazards of unsafe toys – no child should ever be injured, get sick or die from playing with a dangerous toy,” Shay said.

The Consumer Product Safety Improvement Act of 2008 tightened lead limits and phased out dangerous phthalates (a group of chemicals used to make plastics more flexible and harder to break) resulted in some improvements in the toy market. Despite the past stronger rules in the last five years that have helped get some of these hazardous toys of the market, not all toy manufacturers comply with the law, and “holes in the toy safety net remain.

Approximately 3,378,073 children under the age of 18 were treated for toy-related injuries in the U.S. between 1990 and 2011, with a 61% increase occurring between 1990 and 2001 alone. Scooters, wagons, tricycles, motor-powered vehicles (think Barbie's Jeep), and other ride-on toys accounted for 35 percent of injuries and 43% of hospital admissions during this time frame. Toxic toys that are cause for concern this year can be found at all major toy retailers, such as Target, Walmart, Dollar Store, and Toys-R-Us.

Sara Smith, a consumer protection attorney, says, "One of the first things little people do when they get a toy is put it directly in their mouth. These toys are small . . . and are coated in lead-based paint." "We need to protect our youngest consumers from unsafe toys . . . Parents and caregivers should be aware of some of the most common toy hazards," Smith said.

Smith was able to demonstrate through the use of a choke tube cylinder, which is used to determine whether toys are labeled lawfully according to age-appropriate use, Edushape toy blocks that present a major choking hazard for young children. The blocks are labeled as appropriate for children above the age of two, but posed a serious choking hazard when tested with the cylinder for children aged three. Consumers should not only be concerned this holiday season with toxic chemicals contained in the substance of their toys, but also with the risk of false labeling.

"Every year we usually have one or two cases of choking that results in either death or severe neurological impairment," said Dr. Eric Higginbotham of Dell Children's Hospital. Dr. Higginbotham has seen the results of children who have come across small toys and says, "[S]ome of these injuries can be devastating." Dr. Higginbotham explained the difficulty in having discussions with parents of children who were completely normal before getting ahold of a harmful toy, and the permanence these parents experience with the loss of a child or seeing their children in a vegetative state.