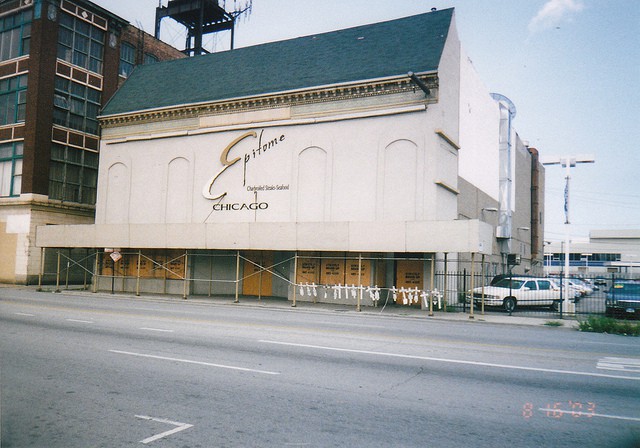 The Epitome Restaurant/E2 Nightclub, where 21 people perished due to a doorway stampede, six months after the incident. The crosses represent 18 of the 21 deaths.

The family of a 24-year old man who was one of 21 people trampled to death in a stampede at a once-popular hip hop Chicago night club settled a wrongful death claim with Clear Channel Broadcasting and AM/FM Ohio.

At the E2 Sunday Night event, the evening's DJ, who plaintiff’s assert was an agent of Clear Channel/WGCI, directed security to use pepper spray to stop a disturbance on the dance floor between two women at approximately 2:25 AM on February 17, 2003. He then further incited the crowd when he yelled over the PA system that it was a terrorist attack.

With more than 1,000 persons in attendance, the terrified group then rushed down a single narrow staircase in the second-story club, falling and piling on top of each other. Many of the patrons were trapped and wedged together in the staircase, including Dashand Ray who along with 20 other victims died from compressional asphyxia.

Settlements ranged from $1.2 million to $2 million

The case is one of 21 consolidated death cases and approximately 62 injury cases where the lead counsel on behalf of all the claimants includes attorneys Melvin Brooks, James D. Montgomery, Jr. and John K. Kennedy of James D. Montgomery & Associates, Ltd. in Chicago. As a result of the litigation efforts of Brooks and his firm the most recent settlements with the Clear Channel defendants have ranged from $1.2 million to $2.0 million.

WGCI extensively promoted the E2 Sunday Ladies Night party on the air. It was designed to have E2 patrons associate the extremely popular dance club with the radio station and its disc jockeys.

The consolidated litigation was initially filed against the E2 Club owners and property owners (Lesley Motors), the City of Chicago, Envy Entertainment Company, Clear Channel Broadcasting, AM/FM Ohio and the DJ. The consolidated cases against the club and property owners settled for their insurance coverage of  $2.5 million. The City was ultimately dismissed after rulings from the Illinois Appellate Court. Envy Entertainment and its owner were judgment proof.

Clear Channel has now settled all the injury cases and all but six of the 21 wrongful death cases. Plaintiffs’ motion to consolidate several of the pending cases for trial was denied by the Cook County Circuit Court judge, who ruled that each death case must be tried separately and not consolidated for trial.

The plaintiffs charged that the DJ at the live entertainment event was an agent or employee of WGCI. Clear ChannelBroadcasting and the DJ denied any agency or employment relationship, arguing that he was an independent contractor. Clear Channel further argued that assuming Woods was its agent, his action was outside the scope of anyauthority or agency and that additionally the DJ’s speech was protected by the First Amendment.

As part of the settlement, Clear Channel will also pay $10,000 towards a memorial for the E2 victims on behalf of the Ray family.