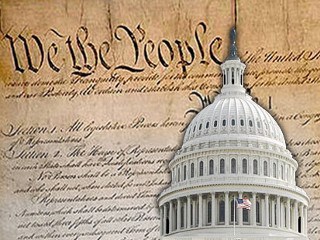 Reprinted from the Blog for Arizona

The plaintiffs — believed to be the most members of Congress to ever sue a sitting president — contend that Mr. Trump has ignored a constitutional clause that prohibits federal officials from accepting gifts, or emoluments, from foreign powers without congressional approval.

It is the third such lawsuit against Mr. Trump on the issue since he became president, part of a coordinated effort by the president’s critics to force him to reveal his business entanglements and either sell off his holdings or put them in a blind trust.

Like the previous two federal lawsuits, this one, filed in federal court in Washington, accuses Mr. Trump of illegally profiteering from his businesses in a variety of ways, including collecting payments from foreign diplomats who stay in his hotels and accepting trademark approvals from foreign governments for his company’s goods and services.

But it creates a new group of plaintiffs who claim the president’s actions have damaged them: Democratic members of the House and Senate who say they have been wrongly deprived of their constitutional right to rule on whether Mr. Trump can accept such economic benefits from foreign governments, according to Senator Richard Blumenthal of Connecticut, who led the effort with Representative John Conyers Jr. of Michigan.

Article I, Section 9, Clause 8 of the United States Constitution, provides: “No title of nobility shall be granted by the United States: and no person holding any office of profit or trust under them, shall, without the consent of the Congress, accept of any present, emolument, office, or title, of any kind whatever, from any king, prince, or foreign state.”

“The founders ensured that federal officeholders would not decide for themselves whether particular emoluments were likely to compromise their own independence or lead them to put personal interest over national interest,” the lawsuit states.”

“An officeholder, in short, should not be the sole judge of his own integrity.”

Mr. Trump now faces three distinct groups of legal opponents, each alleging they have been harmed in a different way. Earlier this year, private individuals who own hotels or restaurants or book events at hotels that they say compete with Mr. Trump’s joined a lawsuit filed in federal court in New York by Citizens for Responsibility and Ethics in Washington, or CREW, a nonprofit watchdog group.

[E]ach new set of plaintiffs makes it harder for the Justice Department to defend the president on the grounds that his opponents have no legal standing to sue him, Mr. Trump’s critics said. “It puts the government in the position of saying that nobody can address this — not hotel competitors, not states, not members of Congress,” said Norman Eisen, the chairman of CREW, which started the legal efforts. “And you cannot get away with that in a rule-of-law system.”

Mr. Blumenthal, a former Connecticut attorney general, said the president’s companies did business in about 20 countries but were shrouded in secrecy, making it impossible for Congress to carry out its constitutional duty of determining whether he was receiving illegal benefits or emoluments. “The truth is we have no clue about the president’s investors,” he said in an interview with reporters Tuesday. “How much is Russian money?”

“What we are seeking first and foremost is disclosure,” he said. “We cannot consent to what we don’t know.”

For the rest of the article visit https://blogforarizona.net/update-draining-the-trump-swamp-democrats-file-emoluments-clause-lawsuit/