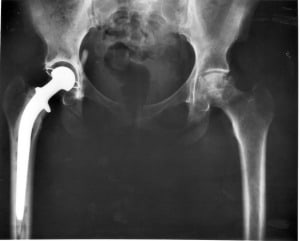 By Larry Bodine, Editor in Chief

Suffering from hip osteoarthritis, Muldoon had hip replacement surgery in 2007. Unknown to him, the DePuy hip was not approved by the Food and Drug Administration, and the surgeon had been bribed by DePuy. For example, in 2009, DePuy paid Dr. Dodgin over $56,000.00, and in 2010, DePuy paid Dr. Dodgin over $30,000.00 in “consulting agreements,” according to the complaint.

Muldoon is unable to work and suffers loss of mobility, loss of range of motion, as well as other severe and permanent injuries, physical pain and mental anguish, including diminished enjoyment of life, as well as the past and future need for revision surgeries.

Approved in 2011 but abruptly withdrawn

DePuy did not seek FDA approval for its Pinnacle CoMplete Acetabluar Hip System until 2009, and won approval in 2011. In 2013, just two short years after FDA approval, DePuy discontinued sales of its Hip System, allegedly due to low sales. “The true reason DePuy discontinued sales of the CoMplete Acetabular Hip System is because the ceramic-on-metal system is defective and unsafe for consumers,” the complaint states.

From 2002 to 2006 DePuy paid kickbacks to orthopedic surgeons to induce them to sue the hip system. The company was caught by the Department of Justice and fined $84.7 million in a deferred prosecution agreement.

"Prior to our investigation, many orthopedic surgeons in this country made decisions predicated on how much money they could make - choosing which device to implant by going to the highest bidder,” the Justice Department said.

The complaint adds, “Unfortunately, the Deferred Prosecution Agreement has not resulted in any significant change or benefit to patients. At least one physician has noted: ‘It's back to business as usual ... Nothing will change until someone goes to jail. It's a big game. ‘”

The lawsuit charges, “DePuy designed, researched, manufactured, tested, advertised, promoted, marketed, sold, and distributed a defective product which, when used in its intended or reasonably foreseeable manner, created an unreasonable risk to the health of consumers and to Plaintiff, and DePuy is therefore strictly liable for injuries sustained by Plaintiff.”

In separate litigation, DePuy/ Johnson & Johnson offered to pay approximately $420 million more to resolve approximately 1,400 additional DePuy ASR lawsuits. The order came from the court extending the settlement offer to plaintiffs who had revision surgery after August 31, 2013 up through January 31, 2015.