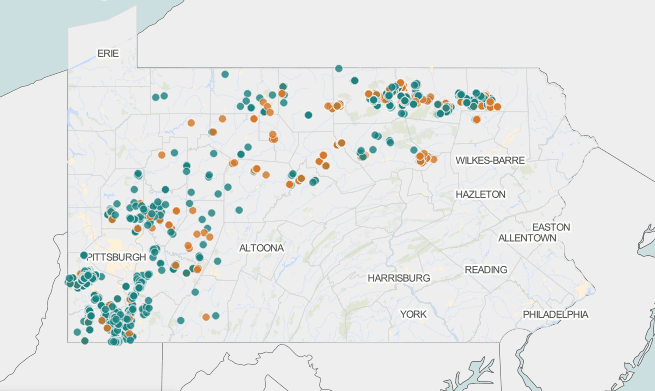 The map shows fracking sites in Pennsylvania. The orange dots here are natural gas extraction operations with one or more environmental violations.

A Luzerne County, Pennsylvania, kidney specialist has been involved in a three-year legal battle against a state law that prohibits him from sharing what he believes to be crucial treatment information to his patients.

In a case before the Third US Court of Appeals, Dr. Alfonso Rodriguez is challenging Act 13, the state's fracking law, which prohibits the disclosure of the chemicals and fluids used by natural gas-drilling companies in hydraulic fracking. The law allows for such a disclosure only to doctors who agree to sign a strict confidentiality agreement.

The Office of the Attorney General (OAG) is currently urging the appeals court to uphold the controversial Act 13 due to the prominence of natural gas thousands of feet below Philadelphia's surface. The use of fracking allows for the cost-effective production of commercially significant amounts of natural gas from what is known as the Marcellus Shale formation.

The formation is one of the largest of its kind in the US, ranging from Pennsylvania and north into New York, spreading throughout Ohio and down to West Virginia. More than 200,000 jobs have been created in the Commonwealth due to the economic industries stemming from the formation, according to the Pennsylvania DOL.

Uproar over the fracking act first arose immediately after its passage in February 2012, when the medical community began expressing concerns about what it deems a “gag rule.” Their concern was met with assurances by state officials that the medical provisions of the law concerning confidentiality were designed to remove roadblocks rather than create them.

Dr. Alfonso Rodriguez believes the law to be a restriction on free speech that will force him to violate ethical rules in treating his patients.

Rodriguez believes the law to be overly broad and a very vague restriction on free speech that will force him to violate ethical rules in treating his patients.

Rodriguez, who frequently treats patients harmed by exposure to the fluids used in the extraction of natural gas through the process known as hydraulic fracking. Under the act, these patients, who are frequently made incredibly sick by this exposure, cannot even discuss with their doctor the chemicals to which they have even been exposed. The most commonly affected patients Rodriguez sees are those who have been exposed to fluids in a blowout while completing well work.

Rodriguez's attorney, Paul Rossi, says, “He is the doctor fracking-fluid exposees go to.” Rodriguez, concerned with the vagueness of the law, hired Rossi to draft a patient letter notifying them that “his ethical obligations to communicate with them may be curtailed” due to the implications of Act 13's medical provisions. Rossi has continued to represent Rodriguez in his suit against the Secretary of the Department of Environmental Protection (and a handful of other various state officials) since its filing in August, 2012.

"Plaintiff does not allege that he has been in a position where he was required to agree to any sort of confidentiality agreement under the act . . . Therefore, to the extent that plaintiff’s alleged injury-in-fact is an inability to exercise his First Amendment rights, he has not yet indicated that he has been prevented from engaging in any sort of communication as a result of the act. Similarly, plaintiff has failed to indicate that he has been forced to waive any of his fundamental constitutional rights.”

Rodriguez is primarily concerned about the alleged infringement of his First and 14th Amendment rights preventing him from sharing information about the contents of fracking fluids and chemicals with fellow medical colleagues, possibly causing delays in advances in the medical community regarding the treatment of this chemical exposure. The U.S. District Judge disagreed in dismissing his case, finding the damages alleged by Rodriguez were much too speculative to allow his case to proceed.

Agreeing with the state of Pennsylvania that the law had not prevented Rodriguez from providing the appropriate medical care to any of his patients, the court held Rodriguez lacked any injury-in-fact that could warrant standing in the case.

Rodriguez argued the state had no compelling interest in enacting a law protecting drilling companies from disclosing the contents of fluids used for fracking, has treated multiple workers following well blowouts in the region. One patient's symptoms included low platelets, anemia, rash and acute renal failure that required extensive hemodialysis and exposure to chemotherapeutic agents.

The OAG, according to a statement made on Monday, January 5, 2015, believes the law correctly balances the needs of patients with the intellectual property concerns of the state’s burgeoning gas drilling industry. According to the OAG's brief:

"[The law] does not restrict Dr. Rodriguez’s right to free speech. ...Rather, it simply requires oil and gas companies to provide medical providers with information involving trade secrets if the medical providers will sign a confidentiality agreement. This constitutes a proper balancing by the General Assembly of the intellectual property rights of a member of the oil and gas industry with the health and safety of individuals who may have been exposed to chemicals used in hydraulic fracturing.”

Attacking once again the standing of Rodriguez to bring the lawsuit, the OAG argued, “The district court correctly determined that Dr. Rodriguez lacks standing because he cannot demonstrate that he has suffered an injury or that his alleged injury is traceable to the commonwealth of Pennsylvania or the attorney general.”

While the law does not place any affirmative duty on doctors and allows the choice of doctors to enter into a confidentiality agreement that would then require drillers to share the fracking fluid information, Rodriguez continues to believe more is required to uphold his sworn professional duty to the medical community and his professional code of ethics.