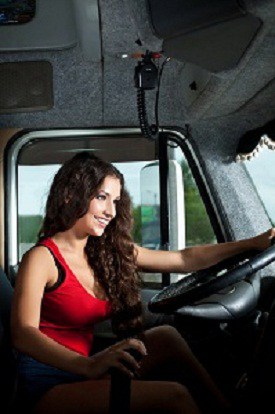 The U.S. Court of Appeals for the Eight Circuit ruled that a female truck driver who claims she was sexually harassed by a male driver during a multiday trip can pursue claims against her former employers under federal and state anti-discrimination laws. The divided Eighth Circuit panel held that the district court failed to consider everything that occurred during a mandatory 34-hour rest period, during which her truck driving partner exposed himself to her, offered to forgive a debt in exchange for sex, and became aggressive when she refused his advances.

"Just get along with him"

The kicker for the Eighth Circuit was that when Tri-National Logistics (TNI) employee Rebecca Nichols reported the harassing conduct to her dispatcher, he told her to just try to get along with the James Paris, the male driver. Instead of taking immediate remedial action, which is critical in the defense of a sexual harassment compalint, the company essentially stranded Nichols. It did not arrange a new driver to connect with Nichols until seven days after her initial report.

Summary judgment was affirmed against Nichols’ retaliation claim because her employer successfully argued that her unsafe driving (which had long been a concern prior to her harassment claims) was the sole basis for her discharge.

According to Nichols, TNI (and RMR Driver Services Inc.) arranged for Nichols and Paris to drive three hours to his home in Pharr, Texas during their 34-hour rest period. Once inside his home, Paris made an unwelcome advance by offering to forget about the $800 Nichols owed him if she would have sex with him. Paris both fully and partially exposed himself to Nichols in their truck before they had even reached Laredo, TX. Paris became “excessively mad” and twice “forcibly took away” her keys to the truck and her mobile phone when she declined his advances, Nichols alleges.

Less than two months after Nichols was hired in August 2011, she was fired by TNI for getting her truck stuck in the mud and damaging the trailer door. She was rehired in October of the same year on the condition that she could no longer drive alone. Her first three driving partners consecutively refused to continue driving with her, telling TNI Nichols took her eyes off the road to use her cell phone; ran a stop sign and caused an accident; and otherwise engaged in unsafe driving practices.

Nichols even made a request to dispatch to take the truck to a place where she could stay overnight, away from Paris, which was denied. She told the dispatcher, “I can’t believe you’re telling me that. Didn’t I just tell you maybe an hour ago that the man was trying to control me to no hilt and I couldn’t get away from him?” The dispatcher told her to try to “get along with [Paris] until you guys get back out on the road” and offered to pay half the cost of a motel room, should Nichols venture to pay for one. Nichols even slept in the truck by herself one night, but eventually asked Paris to take her to a nearby motel.

One month later, Nichols drove with a different driver who reported that she drove over the speed limit, ran at least one red light, talked on her cell phone while driving, and kept her tractor brakes on while driving. The field safety supervisor recommended Nichols for termination and the VP of operations fired her.

Employers take note: it is always challenging to deal with employer offenses if there are contrary allegations of poor employee performance. However, there must be a simultaneous understanding that an employee's errors on the job do not justify inappropriate workplace activity, such as harassment or other illegal behaviors. In complicated situations, the involvement of human resources and prompt remedial action are helpful next steps.