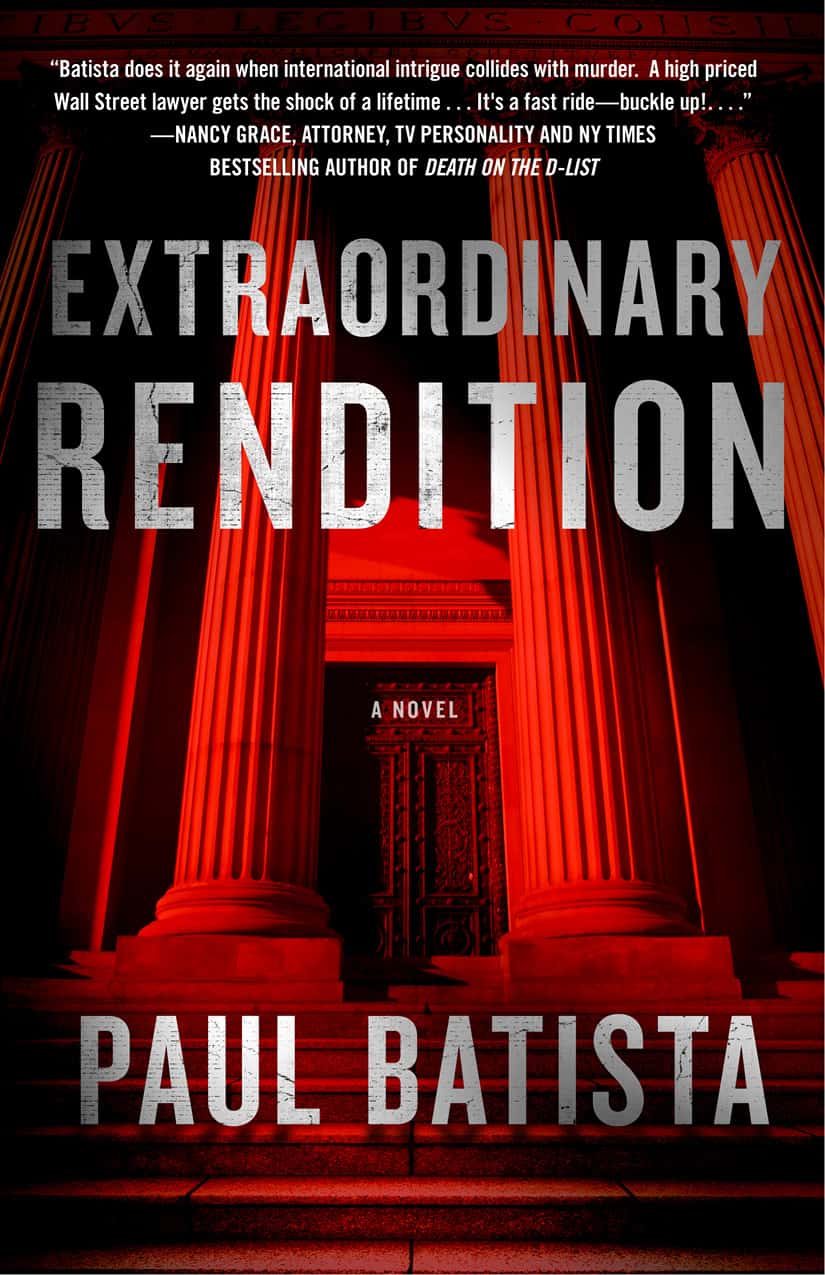 This is a book review of the new book Extraordinary Rendition by Paul Batista.

In this new thriller novel, Attorney Byron Carlos Johnson got waaay more than he bargained for when he volunteered to handle a pro bono case. A corporate partner at the wealthy megafirm SpencerBlake, Byron had never defended a criminal case, much less the first of its kind in an American Court.

His career was in decline when a civil rights group called him. Byron said he wanted to represent a person arrested for terrorism. He got Ali Hussein, along with the frightening and seductive characters who would turn his pleasant life into a nightmare.

Author Paul Batista’s new book Extraordinary Rendition takes a reader through a bewildering world of a defendant with no rights, a system of secret hearings and a federal prosecution infected with spies. That’s because Ali Hussein is facing a death penalty trial for being the accountant for Al Qaeda.

The case is governed by national security and it makes a reader ask -- What rights does a Syrian national arrested overseas have? Can a SAMS designation (“special administrative measures”) by the government really allow for secret hearings in federal court with no transcript? Do anti-terrorism laws in fact mean that key evidence in a civilian trial is not discoverable?

It’s a very realistic, post-9/11 legal setting where the Constitution does not apply. We see it through the mind of a smart lawyer who will not be intimidated. The book will make attorneys ask themselves how well they would handled the unexpected events and personalities.

Author Paul Batista, a trial lawyer himself, makes the book fun by salting fact with fiction. For example, the law firm occupies five floors in the actual Seagram Building at Park and 53rd in New York. But which law firm is fictionalized? White & Case? Weil Gotshal? Any reader who knows New York will delight in all the Manhattan references.

The author is also good writer, turning phrases such as “lawyers, like nuns, travel in groups,” and “the fluent, well-crafted, slightly supercilious language” that federal judges use.

Our hero, Byron, is in his mid-60s and his $3 million draw has been cut in half because his productivity is down. He’s looking for backup when he meets a law student whom he calls “Christina Bright Eyes.” She gives him legal support and a whole lot more.

Byron faces off against Executive Assistant US Attorney Hal Rana of the Southern District of New York, along with the shadowy figures who accompany him in court. Who are these guys, a reader wants to know, and can they legally do that to a defense attorney?

The prosecutor takes advantage of unpublished presidential orders that provide for sealed hearings, secret grand juries that hand up undisclosed indictments, and investigators with the surveillance tentacles of the CIA. This book is about secrecy and what it can do to American justice.

The book is a brisk read for a business trip or a long flight. That said, it will cause lawyers to ask themselves how well they would do if a court asked you to defend an enemy combatant. Would you fall for the traps that Byron Carlos Johnson encounters? Put yourself in his shoes in Extraordinary Rendition and see for yourself.

About the author: Paul Batista, novelist and television personality, is a widely-known trial lawyer specializing in federal criminal litigation. He is also a guest legal commentator on television shows including, Court TV, CNN, HLN and WNBC. He’s also appeared in the HBO movie, You Don't Know Jack, starring Al Pacino.

A prolific writer, Batista authored the leading treatise on the primary federal anti-racketeering statute, Civil RICO Practice Manual, which is now in its third edition (Wiley & Sons, 1987; Wolters Kluwer, 2008). He has written articles for The New York Times, The Wall Street Journal, and The National Law Journal.