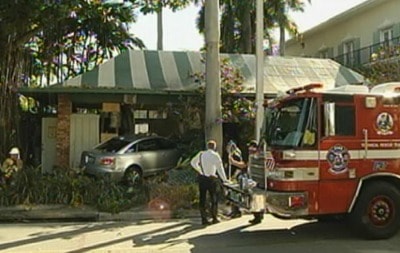 The Riverside Hotel, a Fort Lauderdale, Florida, landmark on 620 East Las Olas Blvd., was found partly liable during a June 23, 2015, jury trial verdict for $24,057,83.00 The civil case arose out of a highly publicized and tragic accident that resulted in the death of a pregnant guest.

Michael and Alanna DeMella were visiting from Massachusetts in March 2012. The couple checked into the Riverside Hotel and went to the pool.  They had stepped into the cabana restroom moments before the incident. Newlyeds, the couple was expecting their first child as she was seven months pregnant at the time. She was tragically killed on hotel property while in an on-site pool cabana. The Riverside's website here identifies the property as being "Set on Fort Lauderdale's lively Las Olas Boulevard,...minutes away from the city's top restaruants, shops and attractions."

This very setting, it was argued, put patrons at risk given that evidence revealed that the Riverside Hotel's management was aware of speeding vehicles utilizing the adjacent roadway as a speedway they raced thru to circumvent Las Olas traffic. Alanna Demella died on scene, on the hotel property, when Rosa Kim, drove into a structure on hotel property utilized by hotel guests in the pool area as she used excessive speed on the adjacent road.

Kim has been widely reported as being intoxicated at the time. However, a careful reading of news reports reveals details that confirm the roadway intersecting the main hotel property and pool area subjected guests to known risks from speeding cars. Evidence discovered in the civil case revealed that the issue was discussed at hotel safety meetings and that concern over patron safety was widespread within the ranks of employees.

Brad Edwards and Gary Farmer from Farmer, Jaffe, Weissing, Edwards, Fistos & Lehrman, along with Co-Counsel Daniel W. Cotter of The Maher Law Firm, presented the case to a jury over the course of seven days. The lawsuit alleged that the Riverside Hotel had actual or constructive knowledge that motor vehicles regularly and routinely exceeded the posted speed limit near the hotel property.

This arguably put the hotel on legal notice of the potential for a tragedy involving their guests, who would cross the roadway to access the hotel's pool area and to return to and from Riverside's amenities.

Carey Codd of the Miami Herald, identified these very issues in "Ft. Lauderdale Police Request Blood Samples In Riverside Hotel Crash" on April 3, 2012. Codd's report identified local residents that were noted as saying that "speeding has been a problem." Others were noted as confirming that a stop sign on SE 4th Street, half-a-block from the crash scene, was no longer in place and had been removed. Additionally, Codd even reported that there were "also the faint markings where a line was painted in the road for vehicles to stop." The then recently renovated hotel had considered implementing an elevated skybridge or walkway across the roadway but elected not to due to budgetary constraints.

In "Jury Awards $24 Million To Widower In Fatal Cabana Crash," Emily Miller,of The Sun Sentinel, explains the recent verdict and tragic circumstances giving rise to the accident. Despite actual notice of speeding vehicles on the roadway, and evidence that this was discussed at safety meetings, the landmark hotel denied it was responsible in any way for the accident and death of their guest Alanna Demella. Generally, Florida law recognizes that a landowner, or business, owe business patrons the highest legal duty of reasonable care.

The hotel denied that there was any danger to guests. Presented with all the evidence, the civil jury entered a verdict that found the Riverside was 15% responsible for the tragedy and that they should pay that portion of the verdict. That is approximately $3.6M of the total verdict. The hotel continues to deny responsibility as reported in news reports despite evidence at Trial and a jury verdict finding they were aware of conditions that contributed to the accident as reflected in their verdict.