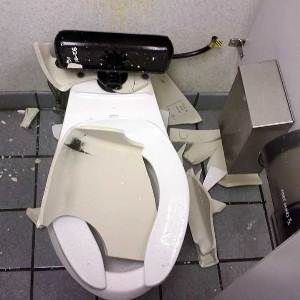 Consumers who own or owned a toilet equipped with a Series 503 Flushmate III Pressure-Assist Flushing System, may be eligible to claim money from the class action settlement.

The manufacturer of the Flushmate toilet flushing system has agreed to pay $18 million to resolve multiple class action lawsuits accusing the company selling a defective product that causes toilets to explode.

The Flushmate settlement was reached in January 2014 after nine months of lengthy negotiations. The proposed class action settlement will resolve five class action lawsuits alleging that Sloan Valve Company manufactured and sold Flushmate Systems that may unexpectedly leak and/or burst.

The Flushmate class action lawsuits were filed after multiple consumers complained that they suffered personal injury and/or property damage caused by their toilet exploding. A voluntary recall of the Flushmate III System was issued in June 2012 and January 2014.

According to the Flushmate Settlement Administrator,  some Flushmate III systems manufactured between Oct. 14, 1997 and June 30, 2009 may leak and/or burst at or near the weld seam of the system’s vessel, releasing stored pressure. If the system bursts, it can lift the toilet fixture’s porcelain tank lid and shatter the lid and/or the toilet’s tank, posing impact or laceration hazards and property damage.

The Flushmate class action settlement does not involve claims of personal injury, only property damage.

Class Members of the Flushmate settlement include anyone who owns or owned a toilet equipped with a Flushmate system manufactured between Oct. 14, 1997 and June 30, 2009.Not all Flushmate Systems qualify. To see if yours does, lift the china lid of your toilet fixture and locate the serial number located on the label on top of the Flushmate System. The manufacturing date code range must fall between 101497 and 063009 to be eligible to file a claim.

Eligible claimants will receive reimbursement for out-of-pocket expenses related to:

For installation reimbursement claims, it is anticipated that the minimum payment will be at least $50 for the first Flushmate Toilet and $25 for each additional Flushmate Toilet located at the same Property address. This amount may be reduced depending on the number of claims filed.

Submitting copies of your invoices or receipts with your claim will help ensure it is approved. However, you may still submit a claim without this documentation as long as you provide the System serial number or other proof of ownership.