"Lost in the Fine Print" Shows Unfairness of Forced Arbitration 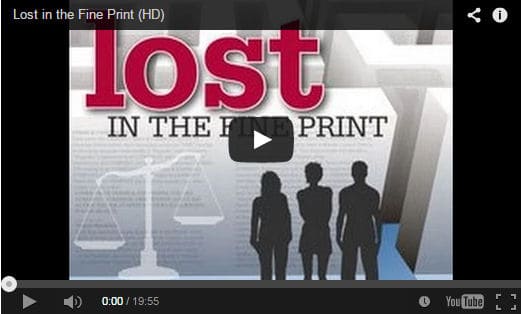 The Alliance for Justice has just released, “Lost in the Fine Print," which is a new documentary that “blows the lid off” the gross unfairness surrounding forced arbitration agreements.

The documentary is narrated by public servant, economist, and professor, Robert Reich, and begins by asking individuals on the street if they are aware of forced arbitration agreements. The answer is the same every time: a resounding “No.”

Most Americans are not aware of how companies take away their right to trial by juries in the fine print of common consumer agreements. Individuals run the risk of waiving this fundamental right every time they purchase a new product, such as a cellular phone or computer software.

The documentary, directed by Paul Bland, argues that forced arbitration agreements degrade the very system of government we fought for back in the American Revolutionary War. The video recounts many horror stories regarding these agreements that should cause individuals to think twice before placing themselves in such a dangerous position.

The problem with forced arbitration agreements is that the most powerful party involved, the big business, decides everything about the agreement itself. An arbitrator, in these situations, is a decision-maker picked by a company that wronged the consumer.

Statistically, the arbitrator in these scenarios finds for the companies 94 percent of the time. The documentary deems this a rigged system that leaves plaintiffs stuck with a decision without the option of an appeal process. Such a violation of the fundamental right to a trial by a jury of peers, says “Lost in the Fine Print,” would make our nation's Founders “appalled.”

One such case of a big business winning over a small Oakland, California, business was recently decided by the Supreme Court of the United States. Alan Carlson, the owner of Italian Colors, has 41 years of experience in the restaurant business.

Carlson, who was paying an annual debt of $60,000 to credit card processors, was disappointed when the Supreme Court decided instead to expand corporate rights. The court ruled that the Federal Arbitration Act does not invalidate a contractual waiver of class arbitration on the ground that the plaintiff’s cost of individually arbitrating a claim exceeds the potential recovery.

Carlson believes that as long as whatever the big business do remains “small enough,” to avoid punishment, courts will continue to prefer to protect big businesses.

The documentary proclaims courts do not care about the problem of forced arbitration agreements. Robert Reich closes the documentary by saying, “If you live in the modern world, you've almost certainly lost your rights in the fine print.”