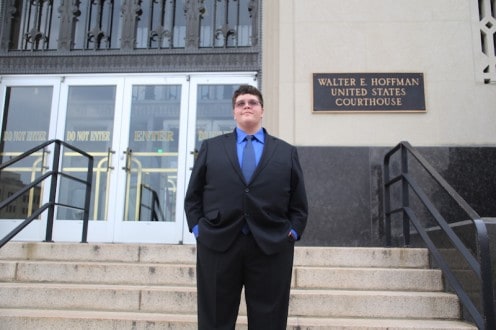 Virginia transgender teen Gavin Grimm has won a battle against his school board for the right to use the boys' bathroom, a potential game changer in the national debate over Title IX and gender identity.

The Fourth Circuit court ruled in favor of 16-year-old Gavin Grimm, reversing the lower district court's decision. Grimm claimed the Gloucester County School Board violated Title IX, a law banning sex discrimination in schools, when the board prevented him from using the boys' restroom.

The Department of Education has said that requiring transgender students to use a bathroom that corresponds with their biological sex amounts to a violation of Title IX, which prohibits sex discrimination at schools that receive federal funding.

In a 2-to-1 decision, the Fourth Circuit remanded with instructions for the lower court to rehear the student’s claims that the Gloucester County, Virginia, school board’s bathroom policies — which restrict transgender students to using a separate unisex bathroom — violate federal law. The circuit judges also ruled that the lower court should reconsider a request to allow Grimm to use the boys’ bathroom at Gloucester High School throughout the case’s pendency.

Which bathrooms transgender people can use has become a divisive political issue in several states, including South Dakota, Texas, Illinois, Mississippi, and Virginia. In North Carolina, a law banning local protections for gay and transgender people — a measure focused on bathrooms but with major negative implications for state employment law claims — has sparked protests, boycotts and calls for an immediate repeal.

Public bathrooms have become the latest battleground in the fight for LGBT rights, with conservative activists and some state lawmakers pushing restrictions that prevent transgender people from using bathrooms in accordance with their gender identity. Activists have used the bathroom debate as a venue for taking away broader civil rights protections, arguing that allowing transgender people into the supposedly safe spaces of single-sex bathrooms creates dangerous scenarios by violating privacy and disturbing common sense.

Incidentally, the Fourth Circuit Court of Appeals also includes the state of North Carolina. That means Grimm's victory sets a precedent for students who might challenge North Carolina's new HB2 law that prohibits transgender people from using public restrooms for the gender with which they identify.

Constitutional lawyer Page Pate said, "This opinion is binding on all the states in the 4th Circuit," which includes Maryland, Virginia, West Virginia, North Carolina, and South Carolina. The country's other federal appeals courts are not necessarily obligated to follow the Fourth Circuit’s ruling, but they are supposed to consider it when deciding similar cases.

The issue that has been at the center of state-level debates in recent months, most notably in North Carolina, has sparked protests and economic boycotts in the state. A transgender university student and employee already have sued to overturn the new law and the Fourth Circuit’s ruling could bolster their argument that bathroom restrictions are discriminatory.

Duke University leaders this week publicly condemned “in the strongest possible terms” the North Carolina law and called for its repeal. McCrory recently said in a video statement posted online earlier this week that he disagreed with the Fourth Circuit’s ruling, calling it a “bad precedent.”

The Fourth Circuit judges wrote that interpretations of federal discrimination policies should be left to politicians, in this case the Obama administration’s Department of Education. The court ruled that Grimm has an argument that his school board violated his rights based on those interpretations, but the court did refrained from answering whether transgender students faced discrimination in Gloucester, leaving that question to the lower court on remand.

“At the heart of this appeal is whether Title IX requires schools to provide transgender students access to restrooms congruent with their gender identity,” the court’s opinion said. “We conclude that the Department’s interpretation of its own regulation as it relates to restroom access by transgender individuals, is to be accorded controlling weight in this case.”

“I think this is going to be a wake-up call for legislators,” said Peter Renn, an attorney for an LGBT advocacy group. He said he believes that lawmakers contemplating bathroom restrictions for transgender people are “essentially on a collision course with federal law and federal courts.”