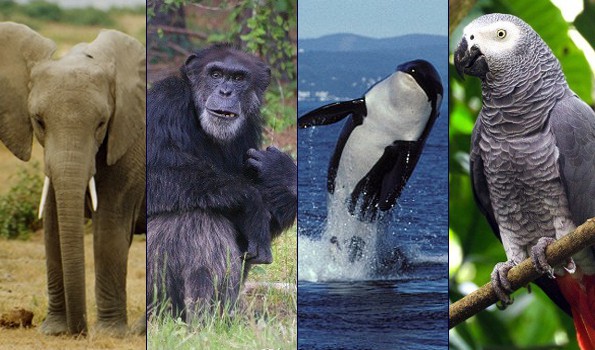 The Nonhuman Rights Project argued for the human rights of two chimpanzees, Hercules and Leo, on Wednesday, May 27, 2015, at a hearing before New York Supreme Court Justice Barbara Jaffe.

Attorney Steve M. Wise, President of the Board of Directors of the Nonhuman Rights Project (NhRP), called the chimpanzees “autonomous and self-determining beings” who should be issued an order releasing them from the Stony Brook University laboratory, which is holding them in what is essentially “solitary confinement.”

See our earlier report: Chimpanzees in New York Get a Show Cause Hearing

The substantive arguments of the NhRP’s case had never been spoken in United States courts before Wednesday, and Justice Jaffe called the two-hour-long proceeding “extremely interesting and well argued.”

Wise, the founder of the Nonhuman Rights Project, said he was very happy with the way the hearing played out, praising the judge as very educated and enthusiastic. “She asked the hard questions of both parties, which made it a very fair hearing,” Wise commented.

But what does the NhRP have to say about the “slippery slope” argument made by opposing counsel regarding the fact that these kinds of rights have never been granted? “There’s a first time for everything,” Wise countered, relying on 1776 and 1879 case law where African Americans and Native Americans obtaine writs of habeas corpus for the first time. Wise, although not comparing animals with humans, pointed out that lawyers have historically made “unprecedented” habeas corpus arguments about rights that they believe are long overdue.

Nor can this grant of rights be considered a “slippery slope,” because Wise is arguing for animals with a scientifically more developed cognitive ability, such as primates, dolphins, whales, and elephants.

Wise believes Hercules and Leo are being treated “as slaves and as our most serious criminals.” These chimpanzees sit in cages within the Stony Brook laboratory in solitary confinement, forced to do whatever the Stony Brook scientists tell them. “These chimpanzees have a completely higher level of autonomous thinking and can even think about their life, their freedom, and their future,” Wise stated.

Wise became passionate about animal rights in 1980, when he read Peter Singer’s 1976 novel “Animal Liberation,” which he calls “the Bible of the animal rights movement.” Wise decided he wanted to dedicated his practice to developing animal rights law, which at the time, essentially did not exist. Wise quickly developed the thought process, “These animals cannot be classified as ‘things’ if they have fundamental rights.” Wise said, “I realized there were no law school classes or cases out there regarding animal rights in the 70s and 80s, and I knew early-on that this kind of legal battle on behalf of Hercules and Leo would take approximately 30 years of preparation . . . so I did.”

Wise spent approximately 30,000 hours between 2007 – 2013 researching, discussing, and preparing to file a writ of habeas corpus on behalf of the chimpanzees. “I still remember in 2007, sending out the e-mail that the time had come, and later founding the NhRP. By 2013, we had raised enough money through donations to hire an administrator . . . We hit the ground running, never looked back, and now we have an incredible team,” Wise commented.

Wise admits he thought standing and many other procedural arguments thrown his way would be an issue in proceeding with the Wednesday morning hearing, but Wise broke through the procedural roadblocks quite easily. “We were able to ask the judge to take all of our facts alleged as true because none of our facts were contradicted by opposing counsel. The university couldn’t say where the chimpanzees came from, why they are being used, what’s being done to them, or anything.”

Ruling coming “in due course”

Wise is looking forward to Justice Jaffe’s ruling, which will be made “in due course” according to the justice, and he feels it is likely Justice Jaffe will rule in the NhRP’s favor. Wise is currently looking forward to her decision while pursuing other animal rights cases on behalf of the NhRP. Wise has written two books regarding animal rights: “Though the Heavens May Fall,” and “Rattling the Cage: Toward Legal Rights for Animals.”