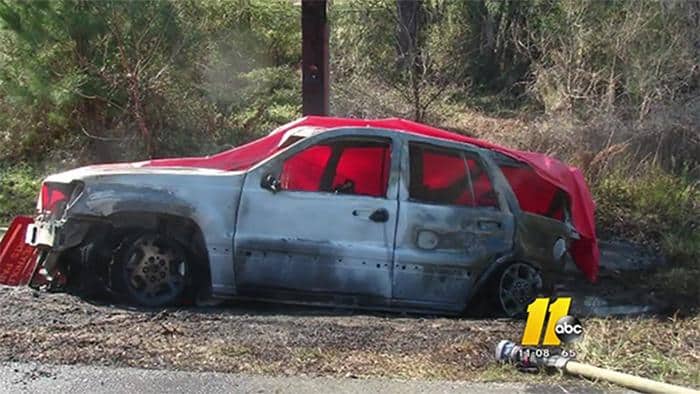 The Georgia Court of Appeals upheld a $40 million verdict in the death of a four-year-old boy who died when his family's Jeep Grand Cherokee was rear-ended and burst into flames.

Remington ("Remi") Walden, age 4, died in flames after the 1999 Jeep Grand Cherokee in which he was a passenger was rear-ended and the gas tank, which was located at the extreme rear of the car, burst. The ruptured tank caused a gas-fed fire that Remington could not escape.

Walden was the first case involving Chrysler's rear gas tank cars to go to trial. Chrysler had managed to settle all others without trial.

The Grand Cherokee in which Remington was a passenger had a rear gas tank located only 11 inches from the back of the car and hanging 6 inches below the bottom of the car.

The Jeep where Remingon Walden burned to death.

Plaintiffs claimed that Chrysler had known for decades about the dangers of that gas tank design and that a "midships" gas tank location - forward of the rear axle - was much safer.

Chrysler admitted that the rupture of the gas tank caused the fire and that it could have put the gas tank on the 1999 Grand Cherokee in the "midships" position. Plaintiffs argued there was no evidence that a "midships" gas tank would have been punctured in this wreck.

Plaintiffs presented evidence that Chrysler knew about 17 other rear impact wrecks where Jeep rear gas tanks failed before Remington Walden died on March 6, 2012. One of them involved a crash in New Jersey in 1998, where a woman escaped her burning Jeep. On February 26, 1998 her mother, Norma Jean Friend, who owned the Jeep, wrote to Chrysler to warn it:

"In thinking about this afterwards, I can only imagine how horrible a situation it would be if a driver had to remove a child from a car seat, or could not get out of the car within moments."

Two years and eight days later, Remington Walden, belted and in a booster seat, died from fire because no one could get him out fast enough.

"It is simply unbelievable that FCA continues to deny this design is defective - a design the industry has known for decades is vulnerable and can cause the most horrible kind of death and injury," said Jim Butler.

"FCA's briefs and oral argument were fundamentally dishonest," he continued. "We are glad that the court saw through them."