How Can A Lawyer Assist Me Following A Natural Disaster? 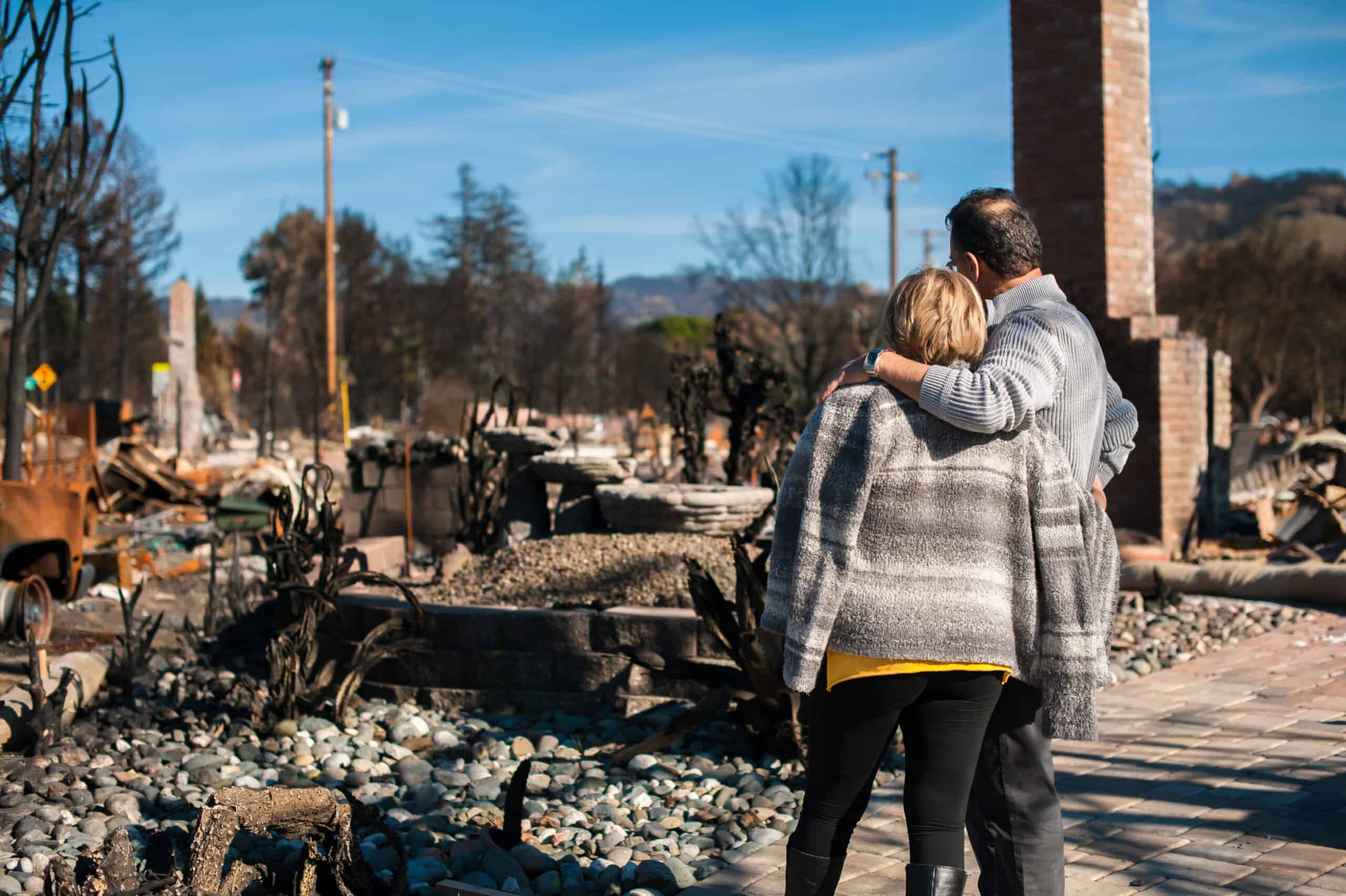 Losing your house or property in a wildfire, tornado, hurricane, or other natural disasters can leave you defenseless and mentally upset. According to CNBC, 20 disasters killed 688 people and cost $145 billion in 2021, with Hurricane Ida accounting for $75 billion of the total.

What is A Natural Disaster?

Tornadoes, hurricanes, earthquakes, blizzards, and even wildfires are all examples of natural disasters. Natural disasters can strike without notice and pose a serious threat to human health and safety, property, key infrastructure, and homeland security.

Q: Is my insurance going to cover the damage from a natural disaster?

A: A normal homeowners insurance policy will not cover this. You will need to get additional insurance, such as flood insurance.

Q:  Can you sue for a natural disaster?

A: Yes. However, keep in mind that there may be times when a human is to blame rather than a natural disaster. For example, someone not properly tying off their boat before a storm and it smashed into other boats on the dock. The insurance company may not consider this an act of nature because the boat owner's irresponsibility was the primary cause of the damage.

Q: What is the difference between a natural disaster and an industrial disaster?

Q: Do I require the services of a lawyer following a natural disaster?

Natural disasters can be destructive not just to your property but also to your human rights. Following Hurricane Katrina, African Americans and other communities of color were denied basic human rights such as adequate shelter, medical treatment, food, and clean water, despite the fact that The Stafford Act Sec. 308 clearly states that provisions for ensuring that supply distribution, application processing, and other relief and assistance activities are carried out in a fair and impartial manner, without discrimination based on race, color, religion, nationality, or ethnicity.

The Stafford Act outlines the steps that federal agencies are likely to take to assist State, tribal, and local governments afflicted by a large disaster or emergency, and it grants the president the authority to declare a national emergency in response to a national disaster.

This declaration gives the president access to resources and disaster relief aid that Congress has set aside. When the president declares an emergency, the Federal Emergency Management Agency (FEMA) is given the authority to organize relief resources to assist overburdened state and local governments. FEMA's capabilities are typically associated with natural catastrophes such as hurricanes and earthquakes during a national emergency. FEMA, on the other hand, has been activated to deal with pandemics like COVID-19.

Most Common Types of Natural Disasters

Wildfires are a prevalent threat that occurs in 38 states across the United States. Wildfires are uncontrolled fires that burn in forests, grasslands, savannas, and other ecosystems for hundreds of millions of years and can begin with a natural occurrence such as a lightning strike or a man-made spark.

Hurricanes are enormous, swirling storms that form over warm ocean waters and have winds of at least 74 miles per hour. Structures and vegetation can be damaged by hurricane winds. When a hurricane strikes land, it carries with it a wall of ocean water known as storm surge. A storm surge is a surge of water that can cause significant flooding and property damage. Hurricane season in the United States lasts from June 1st to November 30th.

An earthquake occurs when two large layers of Earth abruptly move past one another. Earthquakes are one of the worst natural disasters. Each year, roughly 100 major earthquakes occur. They occur without warning, and many of the Earth's earthquake zones are densely populated. When large earthquakes strike such areas, the results can be tragic, with terrible human losses and massive economic costs.

A tornado is a narrow column of violently rotating air that extends from the ground to a thunderstorm. Tornadoes are difficult to detect since wind is invisible unless they form a condensation funnel of water droplets, dust, and debris. Tornadoes are among the most dangerous atmospheric phenomena that we encounter.

Any direct damage to tangible property is referred to as property damage. The damage can be caused by someone else's negligence, intentional damage, or a natural disaster. While insurance is normally used to cover losses, compensation from the offending party may be necessary, such as when the costs of damage exceed the policy limits. The amount of compensation payable is usually determined by the value of the property and/or the cost of replacing or repairing the damage, as well as any costs incurred until the property can be replaced or repaired. Because heirlooms or sentimental assets may be irreplaceable, evaluating compensation becomes more subjective.

What Can I Expect From A Property Damage Claim?

Dealing with storm-related property damage may be exhausting, unpleasant, and expensive. How you will pay for the damage is one of the most difficult questions to ask before you can begin to fix it. Knowing who is to blame for the damage can help you get money to cover the charges. It is critical to contact a professional attorney if there is any doubt or ambiguity about who or what caused the harm or personal injury.

Compensatory claims are intended to cover the costs of repairing or replacing damaged property. Consequential damage claims cover any expenses spent as a result of the damaged property becoming unusable, such as a store temporarily closing after a truck crashed through it. Punitive damage claims arise not as a result of actual property damage but as punishment for the perpetrator and to discourage others from acting so. Punitive damages are generally limited to ten times the amount paid for compensatory damages and can only be awarded after compensatory damages have been awarded. Finally, incidental damage claims seek compensation for expenses incurred as a result of property loss or damage.

Who is accountable for storm-related injuries?

It's one thing to have your property damaged by a storm or hurricane; it's quite another to get injured as a result of the incident. Falling trees or branches, for example, can be extremely dangerous, if not deadly.

In these cases, many of the same laws that apply to property damage apply. The first step is to review your personal insurance policy to see what expenditures it will cover. A personal injury lawsuit may be possible, depending on the circumstances.

If the damage was caused by someone else's negligence, such as a dying tree in someone's yard that was ignored over time, you may be entitled to sue that person for compensation for your injuries. However, keep in mind that this can be a daunting undertaking, so having an experienced personal injury attorney on your side can help you navigate where you stand on who to bring a lawsuit against.

In order to file a claim after a disaster, most insurance companies have processes and time constraints that you must follow. We've outlined the steps you'll need to take to properly file a claim.

Insurance firms have even discovered that undervaluing the cases of insurance holders can save them millions of dollars.

Following Hurricane Sandy, some insurance clients were denied storm-related flooding coverage. The house's damage "existed prior to the storm," according to false allegations, or it may have been caused by "natural planet activity." Following the disaster, insurance specialists observed that insurance companies frequently rejected genuine insurance policy cases while underpaying significantly. The truth is that many insurance companies will go to any length to make a profit, even if it involves exploiting one of their consumers.

Dealing with the aftermath of a disaster is challenging enough without having to worry about your contractor. Some of these people are trustworthy, while others are not. Untrustworthy individuals may accept your payment or insurance payout without completing the service. Furthermore, they may use inferior materials and perform labor that is not code-compliant.

There are steps you may take to avoid disaster fraud, according to the National Insurance Crime Bureau. These steps are as follows:

Will Natural Disasters Be Covered By My Homeowners Insurance?

Homeowners insurance is a form of property insurance that protects a person's home, as well as furniture and other belongings in the home, against losses and damages. Liability coverage for accidents that occur in the home or on the property is also included in homeowner's insurance.

When a natural disaster happens, insurance companies must ensure that their policyholders are compensated in a timely and viable manner. Policyholders make on-time payments in order to obtain insurance coverage under such dreadful circumstances.

Although your homeowner's insurance covers many natural disasters and meteorological events such as wind, hail, lightning strikes, and wildfires, it does not cover damage caused by floods or earthquakes. Each of these dangers would necessitate its own insurance policy. Many homeowners might not realize this until it is too late. You truly need three types of policies to obtain full coverage for natural disasters: house, flood, and earthquake.

The total number of pipelines destroyed by Hurricanes Katrina and Rita as of May 1st, 2006, was 457. Pipeline damage was mostly caused by damage or failure of the host platform's or its development and production pipes, the influence of dragging and displaced objects, and pipeline interaction at a crossing. There were 611 reports of hazardous material discharges in the NRC database, including crude oil and condensate, as well as natural gas.

These two hurricanes caused environmental devastation in the Gulf of Mexico and on The Gulf Coast due to the oil rigs being damaged by the high wind and large waves. Hurricane Katrina alone caused direct land destruction due to wind, storm surge, and levee failure, leaving New Orleans citizens in a toxic stew as sewage systems failed, causing toxins to be spread across the city.

What Is the Process for Filing a Natural Disaster Claim?

Dealing with the aftermath of a hurricane, tornado, fire, or other natural disasters may be highly stressful, if not terrifying. Policyholders anticipate their insurance companies to fix any damage caused by a natural disaster when they file a claim; however, this is not always the case. In actuality, policyholders make costly paperwork mistakes that cost them thousands of dollars. This is primarily due to consumers failing to read their policy's fine language, resulting in underinsurance and, in some cases, paying for coverage out of pocket.

We've outlined some simple measures you may take to ensure your claim is submitted appropriately.

Keep in mind that most insurance companies have a filing deadline, so having everything in order and a skilled attorney ready to assist you can make the process move more easily.