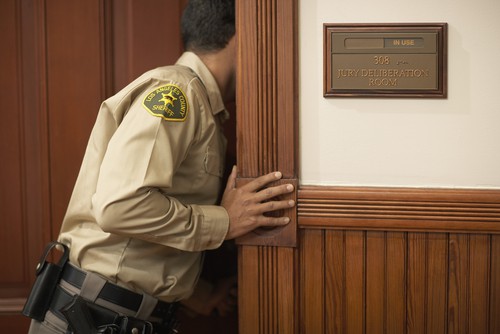 The Arizona Supreme Court affirmed a trial court decision to deny a new trial for a case in which the bailiff engaged in prohibited ex parte communication with the jury during deliberations.  The bailiff told the jury that an hour or two would be plenty of time for deliberations.

During closing arguments, American Power Products attempted to simplify the case, encouraging the jury to look specifically at “exhibit No. 412 Tab two” and avoid all other exhibits.  Counsel for CSK, Inc. suggested the jury reject all claims and counterclaims and award American the $10,733 it owed to American.

During jury deliberations, a juror asked the bailiff how long deliberations typically lasted.  The bailiff told the jury “an hour or two should be plenty.”  After deliberating for one to two hours, the jury returned a verdict for American of $10,733.

American hired an investigator, learned of the jury ex parte communication with the bailiff, and moved for a new trial based on improper jury conduct and the bailiff’s statement to the jury.

The trial court denied the motion for a new trial without conducting an evidentiary hearing.  American contended that the jury’s quick deliberation was “aberrational” and “kind of stunning.”

The court responded that it did not “think it was stunning at all,” and might have been in response to counsel's failure to follow the court’s suggestion to simplify the case, which featured a confusing combination of contract provisions and technical jargon.

The court of appeals reversed and remanded the case, finding that the trial court erred by not holding an evidentiary hearing to determine how the jury interpreted the bailiff’s comments.

The Arizona Supreme Court reviewed the case finding it “raise[d] an issue of statewide importance.”  The court examined ex parte communications on a case-by-case basis, examining whether there was an improper communication and if so, if the communication was “prejudicial or merely harmless.”

The court determined that the bailiff’s communication with the jurors was improper, but that it had no bearing on the issues.  The court discussed that if the bailiff’s communication related to the evidence, ultimate issue, or applicable law in the case, or if it clearly interfered with the jury’s decision-making process, then the statements would be considered prejudicial.

In this case, the court found that the bailiff’s statement did not favor either party, and did not interfere with the jury’s decision-making process or deliberations.  The court reversed the court appeals’ decision and affirmed the trial court’s denial of a new trial.