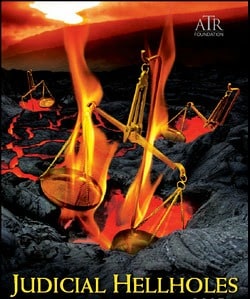 The American Tort Reform Association, an anti-consumer lobby backed by the medical industry and corporate interests, named its annual list of "Judicial Hellholes" where plaintiffs have succeeded in consumer class actions, appeals and product liability cases.

ATRA is one of many lobbies dedicated to polluting the courts with tort and liability reform through propaganda and ghostwritten legislation. ATRA's membership includes a coterie of pro-business, anti-worker non profits, small and large companies, as well as state and national trade, business, and professional associations.

ATRA conspires with ALEC, the American Legislative Exchange Council, to take away consumer rights in the courtroom.

For your entertainment, we present an excerpt of this year's list of corporate "Judicial Hellholes."

is the [sws_highlight hlcolor="fbfac7"]undisputed heavyweight champion of the consumer class action. [/sws_highlight]  Its plaintiff-friendly laws spur ridiculous lawsuits against companies that sell products ranging from breakfast cereal to bagged walnuts.  California’s small businesses have been under siege from trolling disability-access lawyers and their professional plaintiffs who look for technical rules violations, then demand thousands of dollars to settle.  The state enacted modest reform this year only after a threat of federal intervention.  Los Angeles is seeing a surge of asbestos cases, as personal injury law firms from elsewhere have moved into in Southern California.  California’s limit on pain and suffering awards in medical malpractice cases, which has contributed to a stable healthcare environment for many years, is under constant attack.  Mounting cuts to the judiciary’s budget, and loss of court staff, particularly in Los Angeles, leave litigants to worry about delays and even the ability to appeal adverse rulings.

[sws_highlight hlcolor="fbfac7"]is feared by business defendants[/sws_highlight], who feel that some Mountain State judges tip the scales of justice against them.  The lack of a full right to appeal adds to their anxiety.  The state’s personal injury law remains out-of-the-mainstream, although its high court deserves recognition for some sound rulings.  The electoral defeat of West Virginia’s long-serving Attorney General, Darrell McGraw Jr., in November 2012, came too late to affect the state’s ranking, but could contribute to a fairer legal environment in the years ahead.  AG McGraw was known for partnering with plaintiffs’ lawyers to sue businesses on a contingent-fee basis, operating his office as a virtual personal injury law firm, and using settlement money for his own favored causes and self-promotion.

is known as [sws_highlight hlcolor="fbfac7"]the nation’s asbestos court [/sws_highlight]and, this year, it is on track to beat its lawsuit record, set in 2003, when the county was thrust into the national spotlight for litigation abuse.  The county finally decided to abandon its unique and controversial system of assigning trial dates to favored local law firms after it was revealed that the judge who oversaw the asbestos docket received tens of thousands of dollars in campaign contributions from lawyers in those same firms.  The money has since been returned and the asbestos docket is under new management.  The election of a former head of the Illinois plaintiffs’ bar to the appellate bench overseeing its courts provides new reason for concern.

the financial and political capitals of the state, have collectively fostered the Judicial Hellholes reputation of “Sue York.”  Each year, New York City faces more than a half-billion dollars in tort liability from lawsuits alleging falls on sidewalks, inadequate care in hospitals, or mistreatment by police. [sws_highlight hlcolor="fbfac7"]Businesses also face extraordinary liability[/sws_highlight], such as through a unique state law that imposes liability on those who undertake construction projects, regardless of who is at fault.  The city also hosts more than its share of fraudulent claims, and the solid hold of plaintiffs’ bar over the legislature continues to stymie needed reforms.

after several years on and off the “Watch List,” rounds out the Top 5.  Three years ago, ATRF noted that plaintiffs’ lawyers referred to Baltimore among [sws_highlight hlcolor="fbfac7"]the “home run jurisdictions” for asbestos cases[/sws_highlight].  Since then asbestos filings have surged, largely driven by tort kingpin Peter Angelos, owner of the Baltimore Orioles.  Angelos is seeking to consolidate thousands of claims, which, if permitted, would place expediency over fairness.  Also on the minds of those who face litigation in Baltimore is a case before Maryland’s highest court, in which some plaintiffs’ lawyers – not elected state lawmakers -- are seeking to end longstanding legal doctrine that bars recoveries by plaintiffs who are at fault for their own injuries.  Such a significant change would disrupt many aspects of Maryland personal injury law, erode personal responsibility, and fuel more lawsuits.