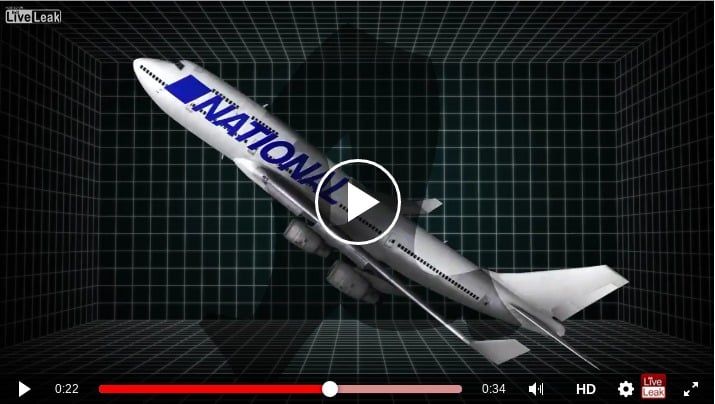 A Cook County, Illinois, jury has returned a verdict in favor of the families of three of seven crew members who perished in the dramatic crash of a National Airlines 747 cargo airplane in Bagram, Afghanistan on April 29, 2013.

The crash itself was captured on a dashcam video that went viral over the internet shortly after the accident occurred.

The plaintiffs sued National Air Cargo, Inc., an affiliated company of National Airlines, which through the employees of its regional office in the Middle East, planned, loaded and restrained five Mine Resistant Armor Protected ("MRAP") trucks for transport on a Boeing 747-400 converted freighter from Camp Bastion, Afghanistan to Bagram.

There were five MRAPs loaded on the accident airplane: two 12-ton M-ATVs and three 18-ton Cougars. The MRAPs were owned by the U.S. Marine Corps and were ultimately destined for Yermo, California.

National Air Cargo Middle East provided for use of 24 straps with the M-ATVs and 26 straps for the Cougars.  Boeing determined that a minimum of 60 straps were needed just for the smaller M-ATVs.

National Air Cargo Middle East provided for use of 24 straps with the M-ATVs and 26 straps for the Cougars.  Boeing determined that a minimum of 60 straps were needed just for the smaller M-ATVs.

Upon takeoff from the stopover in Bagram, the restraining devices for one or more of the MRAPs failed, and the rear-most MRAP went through the aft bulkhead in the tail of the airplane, damaging flight control systems and hydraulics to the extent that the airplane became unrecoverable.  The airplane quickly pitched nose-up and entered an aerodynamic stall causing it to fall and hit the ground.

Each of these awards included $5 million for the shock and fright each of the men experienced from the time of takeoff until the time of the airplane's impact with the ground.

"The jury's verdict sent a message that our society still values human life and safety over the pursuit of increased corporate profit," said Donald Nolan, who along with Thomas Routh of Nolan Law Group represented the estates of Jamie Brokaw and Jeremy Lipka. The estate of Brad Hasler was represented by David Katzman and Bruce Lampert of Katzman, Lampert & McClune in Troy, Michigan.

Trials in the cases for the remaining four crew members are expected to be set shortly.