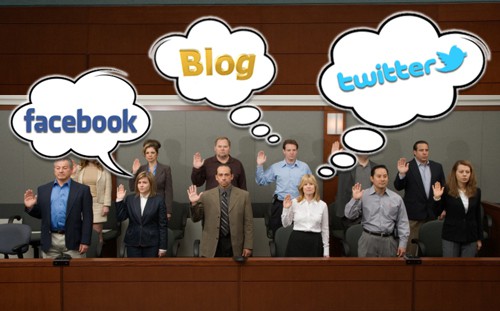 A large corporation was accused of financial irregularities by a government agency. The case was going to trial. Hundreds of millions of dollars were at stake. The corporation’s defense team wanted to empanel a jury that was as politically right-leaning as possible. The defense believed that such a jury would hold positive views about corporations and business, be less inclined to trust the government, and therefore be more open to its arguments.

As is typical in a big, high stakes trial, the defense team engaged jury consultants to gain an understanding of the prospective jurors within the brief time the judge allotted for jury selection. The consultants focused on the jurors’ appearance, their affect, and verbal skills, and drew inferences from those characteristics to inform the defense team’s voir dire.

But then the defense went a step further by engaging a team to conduct a social media analysis of the prospective jury pool.

A 2012 Pew Institute study found that 77% of individuals ages 30-49 are active on social media networking sites, sharing “the most intimate details of their lives” despite privacy concerns. Social media analytics consists of deploying sophisticated algorithms to sift rapidly through vast volumes of this rich data to identify connections maintained by individuals, as well as written and visual posts. The analysis may reveal significant connections between individuals that could be problematic, or perhaps even helpful if they were to sit on a jury. It also may uncover commentary about politics, religion, business, or other topics that can be critical to attorneys in jury selection.

Many bar opinions recently have called social media analysis of prospective jurors fair, even necessary. A recent opinion by the New York Committee on Professional Ethics states: “standards of competence and diligence may require doing everything reasonably possible to learn about the jurors who will sit in judgment on a case.” And as the American Bar Association advised in 2014: Unless limited by law or court order, a lawyer may review a juror’s or potential juror’s Internet presence, which may include postings by the juror or potential juror in advance of and during a trial.”

Of course, it is important that this review and social media research be conducted ethically and lawfully. For instance, the New York City Bar’s guidelines say, “Attorneys may use social media websites for juror research as long as no communication occurs between the lawyer and the juror as a result of the research.” In other words, the friending of people on social media for the purpose of requesting (or otherwise obtaining) information is prohibited. Even inadvertent online contact by attorneys may be problematic. This makes the use of analytical tools all the more compelling.

Who Are These People?

In the case of the corporation accused of financial malfeasance, the defense team leveraged a social media analytics tool that allowed researchers to quickly identify and analyze the profiles of more than 80 prospective jurors across such platforms as Facebook, Google+, Twitter, and Instagram, although, of course, not every juror had a profile. Unlike less sophisticated and more scattershot research attempts, this effort allowed for efficient keyword searching across all of a prospective juror’s connections to identify individuals involved in the industry at issue in the case, connections to the government plaintiff, or to witnesses, lawyers or other parties involved in the dispute. In addition, the jurors’ social media profiles were scanned for information on their pages or posts, including their political sentiments and views about business, if any.

The social media analysis was enhanced by simultaneous real-time research in aggregated public records to identify other relevant background information on the jurors such as voter registration, involvement in current or prior litigation, business affiliations, evidence of financial difficulties and possible criminal record history, and other indicia of lifestyle such as whether they lived in a $200,000 or $2 million house.

Relationships with the other side

This analysis uncovered one prospective juror with a Facebook photo showing him with drug paraphernalia. A quick review of public records revealed multiple convictions for marijuana possession. This juror was excused quickly.

Another prospective juror’s Facebook profile contained a photograph of him with President Obama at the White House. The defense did not think that this would be someone who could be relied upon to be pro-big business.

A review of one juror’s social media connections revealed relationships with individuals working at the government agency bringing suit against the defendant corporation, and still another was found to have been involved in recent prior litigation which he did not disclose on the juror questionnaire. . . as lawyers know people will do, either to get on, or off, a jury. Yet another juror, who was tiring of the selection process, posted a comment on her Facebook page while waiting in the jury pool stating that she expected that the attorneys were looking at social media and, if so, she wanted them to know she was very annoyed at having been kept so late in the day at the courthouse, adding, “Don’t pick me!”

In sum, the information gathered and analyzed during this process provided deeper insight into jurors’ backgrounds, and when melded with the analysis of the jury consultants, the defense was able to empanel jurors they believed they understood more fully.

In the end, the jury found for the defense.

Algorithmically-powered social media tools can reveal in minutes what normally could take attorneys and investigators days, weeks, or longer to uncover by other means. Having the capability to use these tools to examine the social media connections and profiles of individuals increasingly is becoming a critical differentiator and competitive advantage not just in jury selection, but in all phases of litigation, from discovery and backgrounding opposing parties and witnesses, all the way through to trial.

Of course, in this case, the defense may have prevailed without employing the capabilities offered by social media analytics tools to empanel the best jury it could. But the advanced research provided the defense with a higher degree of confidence in the jury it did select.

And it certainly was pleased with the outcome.

Lisa Dane is a Senior Managing Director in the Global Risk & Investigations Practice of FTI Consulting, and has over 20 years of experience conducting large-scale fraud investigations, asset tracing, due diligence, and litigation support for law firms and multi-national agencies. She routinely employs social media analytics in tandem with other investigative research capabilities, including in jury selection for clients going to trial.