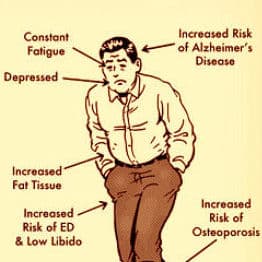 Over the last ten years, manufacturers of testosterone therapy drugs have engaged in a ubiquitous print, television and internet advertising campaign, asking men to speak with their doctors about symptoms such as fatigue, hair loss and loss of sex drive as potential signs of a condition the industry has termed “Low T.” These advertisements often feature a middle-aged man, unable to keep up with his friends or enjoy sex. Consumers are further directed to websites such as “isitlowt.com,” where they can take a quiz to see if they are “one of the millions of men who may have Low T.” It is as if Low-T is a new epidemic.

Contrary to this message however, “‘low T,’ as the condition has been labeled, isn’t nearly as common as the drug ads for prescription testosterone would have you believe,” writes Dr. John La Puma in a Feb. 14, 2014, article in the New York Times. Rather, these advertisements “aim to convince men that common effects of aging like slowing down a bit and feeling less sexual actually constitute a new disease and that they need a prescription to cure it.”

Further, as reported by Natasha Singer in a Nov. 23, 2013, New York Times article “Selling That New-Man Feeling,” according to the Endocrine Society, “men’s testosterone levels fluctuate so wildly – depending on time of day, sleep quality, whether they just ate, whether they are taking care of a newborn and even how their favorite sports team is faring – that a single low testosterone reading may not indicate a problem.”

Regardless, it is clear that these advertisements have struck a chord, as men are responding and doctors are now prescribing testosterone therapy to millions.

Overall sales of testosterone drugs in 2012 estimated at $2 billion, it is not surprising that there are numerous drug manufacturers vying for a share of the “Low T” market. Similarly plentiful are the methods of delivering testosterone to the body. Some of the most popular testosterone drugs and their delivery mechanisms are:

Sadly, with these drugs reaching an increasing number of men, reports and studies of significant adverse events have begun to mount.

As the number of prescriptions for testosterone therapy continues to rise, so does the evidence that prescription testosterone dramatically increases men’s risks of suffering life altering cardiovascular events such as heart attack, stroke, pulmonary embolism, deep vein thrombosis and death.

A study published in The Journal of the American Medical Association in November 2013 linked testosterone therapy to adverse events such as heart attack, stroke and death. See   “Association of Testosterone Therapy with Mortality, Myocardial Infarction, and Stroke in Men with Low Testosterone Levels,” by Rebecca Vigen, et al.

In light of these findings, the Food and Drug Administration (“FDA”) took action on January 31, 2014, and issued a Drug Safety Communication indicating that the FDA is now investigating the risk of stroke, heart attack and death in men taking FDA-approved testosterone products.

Beyond these compelling recent developments regarding increased risks of heart attack, stroke and death, testosterone treatment can also be linked to thrombotic events such as deep vein thrombosis (blood clot in the deep vein system) and pulmonary embolism (blood clot in the lungs).

A 2010 study published in the Journal of Endocrinology & Metabolism found that testosterone therapy increased the volume of red blood cells in the blood (hematocrit). See “Adverse Effects of Testosterone Therapy in Adult Men: A Systematic Review and Meta-Analysis” by M. Mercè Fernández-Balsells, et. al. As hematocrit levels rise, so does the risk of thrombosis or clotting. This is consistent with the PLOS/one study which recognized “a higher frequency of thrombotic events following TT [testosterone therapy] prescription among men with more extensive coronary vascular disease.”

Following the publication of these recent studies and the FDA alert, men injured while taking testosterone have already begun seeking attorneys to represent them against the pharmaceutical giants. Future testosterone litigation on behalf of these men and their families will certainly involve complexities such as deciphering vast FDA regulatory histories, copious discovery, epidemiology and preemption. It is vitally important that attorneys representing injured victims be well-versed in pharmaceutical law or co-counsel with those who are and most importantly be ready for the long fight ahead.

Calvin Tregre and David Harman are attorneys at the Cincinnati office of Burg Simpson Eldredge Hersh & Jardine, P.C. They can be reached at ctregre@burgsimpson.com and dharman@burgsimpson.com respectively.