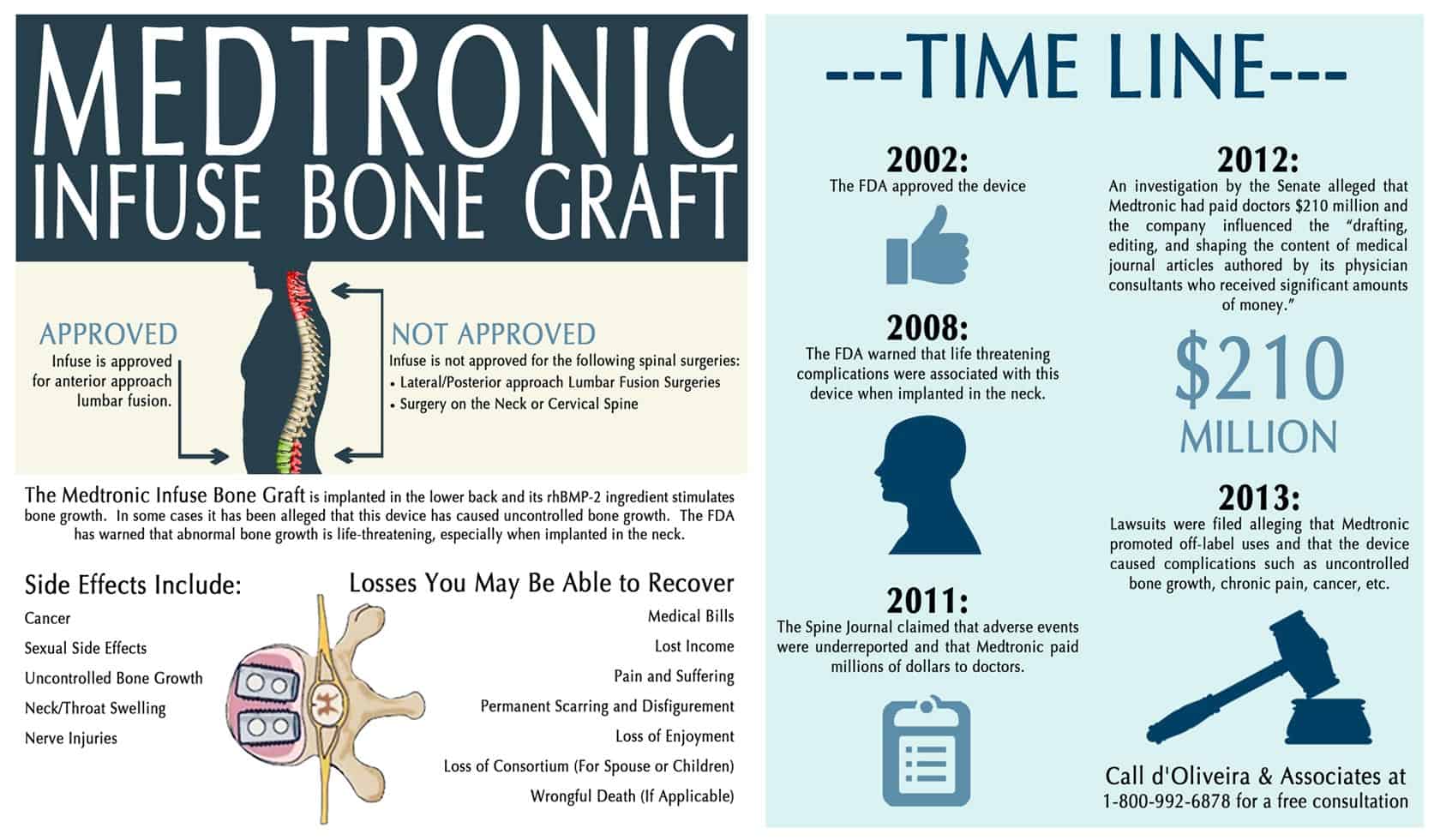 Medtronic, the maker of a spinal bone graft product called Infuse Bone Graft, agreed on May 9 to pay $22 million to settle about 1,000 lawsuits stemming from claims of adverse health outcomes related to the product and claims that the manufacturer illegally promoted the Medtronic bone product for off-label uses. Medtronic is also reportedly preparing a further $140 million to settle an even larger number of anticipated claims.

Medtronic allegedly encouraged physicians to use its Infuse bone stimulator off-label in the cervical spine, which helped generate sales of more than $3 billion for the manufacturer. As of September 2008, about 680,000 units of Infuse Bone Grafts had been used in the US, according to Medtronic.

According to a report by the Senate committee investigating the product, the company's undisclosed manipulation of information through the medical literature included overstating its benefits and downplaying concerns about serious complications. According to MedPage Today, during the past 15 years, Medtronic has paid $210 million in royalties and other payments to a group of 13 doctors and two corporations linked to doctors. Many of the lawsuits claim that it was by paying spinal surgeons the company was able to promote the off-label use of Infuse.

The $22 million will resolve the claims of some 950 people. A further 750 cases brought by 1,200 people are pending across the use, and there could be another 2,600 claims yet to be brought.

Used in more than 1 million patients

Despite FDA reports of complications over the past four years resulting from the off-label use of Medtronic Inc.’s Infuse Bone Graft, Medtronic is not admitting liability in the settlement, and the company “continues to stand behind INFUSE Bone Graft,” according to a Medtronic statement.

Medtronic must have deep pockets: it paid $210 million in payments and royalties to 13 doctors and two corporations linked to doctors. Then again, its Infuse product, which is also known as BMP-2, has been used in more than one million patients since the FDA approved it more than 10 years ago. The product generated sales of $800 million a year, though the amount has declined since 2011 - when the lawsuits started pouring in.

One cynical attorney believes this settlement is simply the “cost of doing business.” Up to 85 percent of those million people had the bone graft surgery off-label.

Dr. Dan Spengler, a Vanderbilt University orthopedic surgeon, said that with many off-label surgeries, there are going to be problems. He suspected that many of the lawsuits involved patients who experienced excess bone growth that occurred after their off-label surgery.

Many of the lawsuits claim that Medtronic illegally promoted Infuse off-label, i.e., for uses that were not approved by the FDA, through its payments to the spine surgeons. One spine surgeon, Dr. Jeffrey Wang, received an undisclosed $459,500 between 2004 and 2007 from Medtronic, Bone Biologics, FzioMed and the DePuy unit of Johnson & Johnson, according to The Los Angeles Times. Wang is currently being sued for fraud and malpractice for surgeries using the Infuse bone graft.

Dr. Mark Ipsen has a number of lawsuits filed against him, again for using the Medtronic product off-label during surgery. He has been accused of medical malpractice, failure to obtain informed consent and fraud. An estimated 2,300 surgeons have used Medtronic products in the US before any serious side effects were reported.

More lawsuits filed in both federal and state courts are still to be settled, according to Medtronic’s recent financial reports. Attorneys general in California, Illinois, Massachusetts, Oregon and Washington have subpoenaed documents regarding Medtronic's sales and marketing of the product.