11 New and Notable Verdicts and Settlements 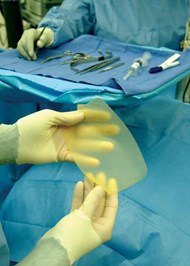 Kathryn Parker, 52, of Michigan City, has been awarded $14.4 million because of malpractice in obseity surgery.She is joined by attorney Kenneth J. Allen during a press conference Thursday. A Michigan City, Indiana, woman was awarded more than $14 million by a federal jury, which ruled that two Read More

A jury in Macon, Georgia, awarded $4.3 million for the death of a baby born 23 weeks into his mother's pregnancy. The parents alleged their doctors failed to take steps to stop the early delivery. The April 21 verdict found two obstetricians, Dr. Henry Davis and Dr. Kerry Holliman, each 50 percent Read More

BALTIMORE -- Black & Decker has agreed to pay almost $1.6 million to settle allegations that it failed to report safety problems with cordless electric lawnmowers. The Department of Justice and Consumer Product Safety Commission claimed that the company violated reporting requirements of the Read More

A Stoddard County, Missouri jury has awarded $19 million to the family of a Steel, Mo. man who was killed in a train crash. Scott Spence, 53, a well-known Bootheel area businessman, died after his Chevrolet Silverado pickup was hit by a northbound Burlington Northern Santa Fe freight train at an Read More

A Baltimore jury has awarded $9.3 million to a man who says he was poisoned by lead-based paint at his former rowhouse. Terrance Smith Jr., 22, lived in a home in Baltimore from birth until he was six years old. In tests between 1993 and 1995, his blood-lead level was 10, twice the CDC's Read More

LOS ANGELES -- A 73-year-old woman who contracted mesothelioma after using asbestos-containing talcum powder has recovered a $13 million jury verdict against New York-based Colgate-Palmolive Company. The verdict was handed down April 28 by a jury in Los Angeles Superior Court following only two Read More

The City of Palm Springs will pay a $700,000 settlement to the family of a drug-frenzied man who died after being roughly apprehended by city police two and a half years ago. Joshua Sznaider, 27, died on Oct. 8, 2012, six days after he was tackled, tased, pinned, choked and handcuffed as he fought Read More

A Bibb County, Georgia, jury has awarded a couple more than $4 million in a wrongful death lawsuit involving the woman’s baby. In 2009, Katherine B. Dean and her husband, Lester Harold Dean IV, filed a lawsuit contending that defendants in the case had failed to provide proper and timely medical Read More