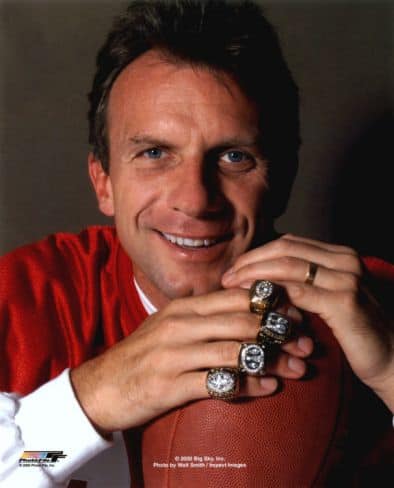 He now brings his lessons of preparation, teamwork and performance under pressure to attorney audiences as a popular motivational speaker.

60 of the nation’s top speakers

A winner and a leader

Widely considered the best NFL quarterback of all time, Joe Montana personifies performance excellence and personal integrity both on and off the field. Yet the word most closely associated with him is not winner — it's leader.

Joe Montana and the San Francisco 49ers won four Super Bowls and were the team of the 1980s. What they accomplished in football may never be equaled. Montana won more than 70 percent of the games he started during his 16-year career with the team and he is the all-time NFL Leader in quarterback ratings. Known for his agility, his vision, his extreme accuracy as a passer and his capacity to retain and act upon staggering loads of information, Montana's excellence as a player is legendary.

He is one of the toughest quarterbacks ever to play the game and his trademark was unflappable poise in the clutch. "Joe Cool," as he was sometimes tagged, played with the same calm determination whether it was a scrimmage or the fourth quarter of the Super Bowl.

Joe is a graduate of the University of Notre Dame, where he received a Bachelor's Degree in Marketing. He lives with his family in California.