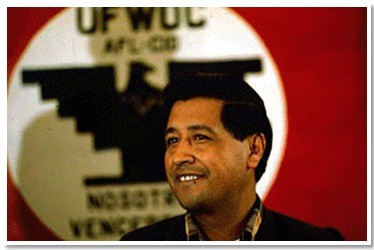 President Obama praised Cesar Chavez and a new movie celebrating him during a White House Screening of "Cesar Chavez: An American Hero."

"We are here to celebrate the life of an American hero.  Cesar Chavez was a man who devoted this brief time that we have on Earth to making sure that this country lived up to some of its lofty ideals, the words of our founding, the idea that all of us are created equal -- a man who organized others to widen the circle of opportunity not just for the people he knew, but for future generations," the President said.

"This movie, this film tells the story of a man guided by an enormous faith -- faith in a righteous cause and a loving God, and the dignity of every human being.  And it reminds us how throughout our history that faith has been tested, and that it falls to ordinary Americans, ordinary people, to fight and restore that faith."

"Cesar himself said that he spent his first 20 years working as an organizer without a single major victory.  But he never gave up.  He kept on going, and the world is a better place because he did.  And that’s one of the great lessons of his life. You don’t give up the fight no matter how long it takes.  No matter how long the odds, you keep going, fueled by a simple creed -- sí, se puede."

Cesar Chavez is the father of The National Trial Lawyers Top 100 member Fernando Chavez.  The motion picture is scheduled to appear in theaters March 28, 2014 and you can see the official trailer below.