Working Better, Faster and Cheaper with a Paperless Law Office 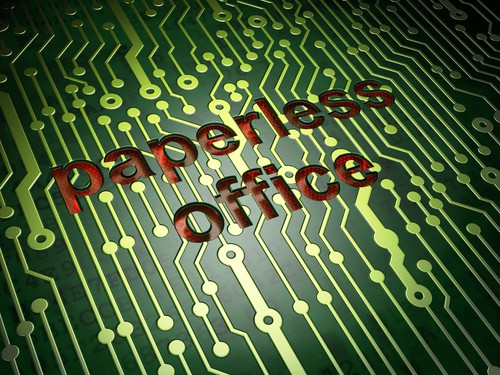 Going paperless extends into tapping into useful web sites and apps designed to help a person organize their thoughts, notes, papers and research.

When New Orleans lawyer Ernest Svenson was handling a case in 2000 that required an abundance of discovery, a friend offered use of his scanner. That piece of office equipment, novel at the time, proved an incredible time saver for Svenson. He was thrilled with the simplicity with which he could locate any scanned piece of discovery.

“It was an epiphany,” he says.

What started as a way to organize one case overflowing with discovery led Svenson to rethink the way attorneys do business every day. Lawyers everywhere have gone paperless, transforming their practices with scanners, apps and digital documents.

Svenson, who authors the blog Paperlesschase, describes a paperless law office as one where an attorney and their team “actively seek to limit the use of paper by using technology and other methods.”

According to Svenson, defining the paper-free work environment is tricky. “If you define it the wrong way, it’s unrealistic,” he says. One thing for sure is that going paperless does not necessarily mean paper is completely outlawed. However, its use is greatly diminished.

The process of transforming the stereotypical law office, where printers consistently spit out pleadings, briefs, letters and more, into a paperless environment, can be daunting. There are numerous details to consider, such as buying the right scanner and document organizing software. You will also have to figure out how to get rid of those clunky and now useless file cabinets!

“People have been using digital documents for years but they didn’t know how to organize them,” says Svenson.

Meanwhile, more and more courts are requiring filings to be electronically submitted. For example, the Federal courts, including Bankruptcy Courts, mandate electronic filing.

Going paperless means more than merely scanning and saving written communications and discovery documents. It also goes beyond owning a laptop, scanner and printer. It extends into tapping into useful web sites and apps designed to help a person organize their thoughts, notes, papers and research.

Svenson himself relies on several apps, each designed to help him lessen his dependence on paper in different ways. For example, he uses the app Evernote to store people’s business cards and type notes. The app also features plug-ins that allow the user to store web pages and Google searches. While those offerings are free, the memory is limited, so Svenson pays an annual fee for additional storage.

“I use Evernote as my black hole,” he says. Whenever he comes across information he thinks he might want to revisit in the future, he saves it to Evernote. That way, he can refer back to it anytime.

According to Svenson, there are several benefits to transforming a law office into a paperless environment. They include:

Going paperless also saves money. There’s less ink to buy for printing opposing counsel’s unwieldy briefs. Less strain on the office copier usually translates into fewer repairs. It certainly reduces the need for toner and paper. The limited use of paper translates into fewer file folders and a diminished need for storage cabinets.

Going paperless also means an increased reliance on technology, such as cloud storage. There are also costs involved in buying virtual storage space for all the documents being scanned. Remote storage of your scanned documentation at an off-site location is also encouraged.

For Al Thompson, a general practitioner in New Orleans, adapting Svenson’s paperless approach has changed not only his law practice, but his personal life, as well.

“I like to take home a lot of work over the weekend. As a solo practitioner, I don’t have to be at my office at any specific time. Then I realized having access to my documents at any time, from anywhere, sounded fantastic to me,” says Thompson, who has been practicing law since 1985.

But Thompson’s turning point occurred in January 2013. He was involved in a two-day civil trial that involved a mountain of discovery printed on a lot of paper. Having attended law school with Svenson and being an avid reader of his blog, Thompson thought the case presented the ideal opportunity to determine if going paperless would help him be more organized. He scanned and saved all the case’s pleadings and discovery into his iPad. On the first day of the trial, he walked into court sporting just his small briefcase while opposing counsel pushed in a large cart overflowing with files, papers and dog-eared books.

The first jury came back deadlocked. When that case came back for retrial in May 2013, Thompson just clicked his way through his iPad to refresh his memory. The jury for the retrial deliberated only 30 minutes before returning a verdict for Thompson’s client.

“It was then I realized paperless was the way to go,” says Thompson.

In addition to the decreased outlay of money on paper and storage supplies, Thompson even saves on postage. He emails opposing counsel instead of sending letters through the US mail, so no envelopes to lick, either.

Gong paperless has also helped Thompson be far more stay organized than he once was.

“I buy digital code books for far less than the hard copies cost and I don’t have to store those big books. I have a law library on my phone. Set up is easy and I refer to it often, and that saves me time,” he says.

On a personal level, Thompson says that since going paperless, he is far more efficient and relaxed. “It doesn’t take as much time to get the same amount of work done,” he says.

It’s not easy being green

According to Johnson, also a member of the business’s Solutions Team, a law firm should consider the cost-effectiveness of going paperless before adapting that practice. If the firm owns a huge number of inactive files that are merely living in storage cabinets, would it make sense financially to have all those documents scanned and stored remotely? If so, what might it cost to find something in one of those electronic files, should the need arise?

“The cost to scan a large amount of paper might not save money versus paying to store them,” he says.

She wrote a study guide about filing personal bankruptcy, published by a division of Barnes and Noble, in 2007. I also edited a book about the American health care system published in 2008 by Rowman and Littlefield.