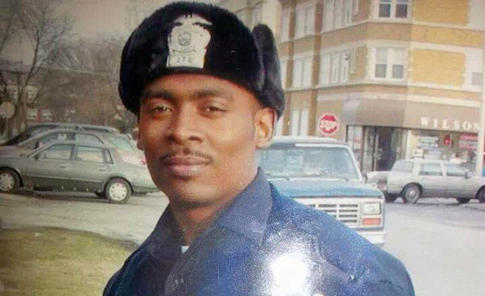 Harris, a 10-year Chicago Police veteran, had just ended his shift and was on his way home the night of March 14 when the van struck his car in the 8700 block of South Lafayette Avenue just off the Dan Ryan Expressway.

The wife of Chicago Police Officer David Harris, 42, who was killed by a van that was being chased by Calumet Park Police, has filed a wrongful death lawsuit against the village.

Harris, a 10-year veteran of the CPD, was driving home on March 14, 2014 when he was killed when the van rammed into Harris’ vehicle on the city’s South Side, and was just 15 minutes from his home.

Harris’ wife Sandra filed the lawsuit naming as defendants the Village of Calumet Park and Jerald Nettles, the police officer who was pursuing the van, and alleges that both acted “with utter disregard for the safety of others.”

Shanell Terrell, 31, of Chicago was driving the van. She was charged with murder and possession of cannabis in connection with the fatal crash.

Corboy & Demetrio attorneys Matthew T. Jenkins and Thomas A. Demetrio represent the Harris estate. Both are members of The National Trial Lawyers Top 100.

The chase began when the van rolled a stop sign and ended in the death of Harris who earned 87 awards during his career with the CPD.

“Officer David Harris was an incredibly special person. He was a highly decorated Chicago police officer, a loving husband to Sandy, and dedicated father to David and Caleb,” Jenkins said. “His loss is profound, not only to the Harris family, but to the entire community,” Jenkins added.

Corboy & Demetrio also obtained an order to preserve evidence in the case, including the audio communications of the Calumet Park Police.

“The Harris family and the public at large are entitled to know how such a preventable tragedy occurred,” Jenkins said.