Roofer Recovers $1.55M for Back Injury in Truck Crash 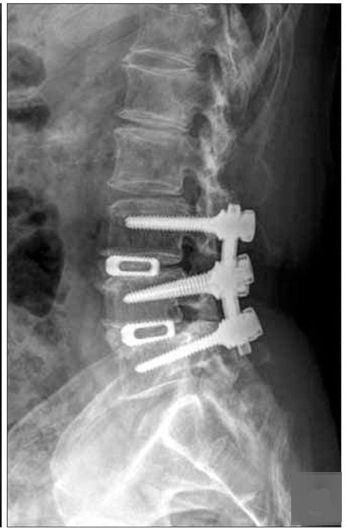 In this example, the doctor performed a fusion with instrumentation at L3-4 vertebrae.

A supervisor of a commercial roofing contractor settled a Virginia truck crash case for $1.55 million, where his truck was struck from behind by a van operated by an employee of an HVAC service company.

John Tatum, a 42-year old roofing worker had to have back surgery that left him in chronic pain. The accident restricted him to lower-paying light-duty work, and also limited his outdoors hobbies and activities, according to plaintiff attorneys Craig B. Davis and Michael W. Lantz, both of Richmond, VA.

Photos taken at the scene revealed minimal property damage to either vehicle, although all passengers in the plaintiff’s truck reported a significant impact. The plaintiff developed neck and back pain overnight, but did not seek medical treatment for several days.

MRI and Flex-X films revealed an spine fractures at lower back vertebrae L3-4 with 13mm of movement, which orthopedic surgeon Dr. Thomas Scioscia related to the accident. Tatum had prior lumbar fusion surgery at vertebrade L4-5 25 years earlier with no evidence of intervening complaints or treatment. Dr. Scioscia performed a fusion with instrumentation at L3-4, exploration and decompression at the prior fusion site, and decompression and laminectomy at L2-3.

Past medical expenses totaled $202,347.82, and the claimed past wage loss was $212,000. Dr. Heatwole prepared a life care plan, and Tatum's future loss of earning capacity was based on the functional capacity evaluation results. The plaintiff’s employment prospects were limited by multiple felony convictions and the lack of a high school diploma.

A defense expert retained by defendants Kenneth Taylor and Capitol Oil, Inc., found causation for the pars fracture but cut off all medical treatment, including therapy and medications, approximately eight weeks after the fusion surgery, even though Dr. Scioscia had not even recommended post-surgery therapy by that date. In addition to also contest the life care plan, the defense expert limited the past wage loss claim and found no medical basis for future wage loss.

"Because of limited coverage, the corporate defendant hired excess counsel. At mediation with Frank Cowan, Utica National Insurance Group took more than seven hours to reach the figure their local adjuster had previously suggested was the bottom of the settlement range. Utica’s managers refused to engage the mediator or excess counsel," Davis said.

"Cowan continued negotiations until the case ultimately settled the night before trial. The settlement occurred only after Cowan sent a letter to Utica’s claims manager at the request of excess counsel offering his assessment of the value of the case and explaining the potential for an excess verdict," he said.

The underlying workers’ compensation claim was also settled in exchange for reducing the subrogation lien by an additional $65,000.